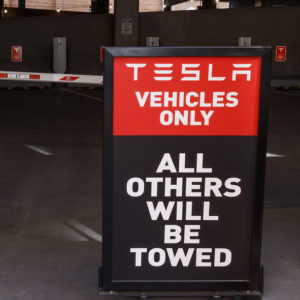 Tesla Gets ‘Such A Deal!’

People get paid to buy Tesla electric cars via generous federal tax kickbacks — styled “rebates” — so it’s no surprise, or at least, nothing new that Elon Musk, founder of Tesla, managed to get the state of Nevada to pay him to build the batteries for his electric cars there.

By not making him pay taxes.

The state deferred all corporate taxes that would otherwise apply for 10 years — and outright exempted Tesla from having to pay other taxes for another 10 years, giving the operation a massive (and artificial) competitive advantage over other businesses located in the state that aren’t exempted from paying taxes.

But by doing this, Nevada exempted itself from something, too: the resources needed to deal with the massive and sudden influx of workers — and workplace injuries — at Tesla’s sprawling battery plant.

According to an investigative report by USA Today, local fire/EMS have been summoned to the plant almost every day to deal with “amputations” — at least three so far — “head injuries from unsecured construction debris” and “people falling through holes in the floor.”

Working at the Gigafactory can be as dangerous, apparently, as driving a Tesla. The cars tend to catch fire — and run into things.

But hey, look over here…

Storey County — which didn’t collect $65 million in taxes from Tesla — hasn’t been able to cope with a quadruple-digit increase in industrial accidents at the enormous Gigafactory complex, which is half-a-mile long, a quarter-mile wide and employs more than 7,000 workers.

It is a small town, all by itself.

A bigger town, as it turns out, than Storey County, itself — which as of the last Census had a total population of just over 4,000 people.

It’s not just industrial accidents (and traffic) that’s on the uptick, either.

Rents have increased by 40 percent in just three years — and longtime local residents are being mass-evicted from what had been affordable housing to make way for the better-paid Giga-workers, who earn on average $30 per hour — about twice the average earned by locals.

The local homeless shelter is full and the wait-list for county assistance is “so long that no new names are being added.”

It’s a part of  Tesla’s car-selling stratagem — which is to offload the cost of buying an electrically powered high-performance luxury car onto people who didn’t: the taxpayers who are mulcted to fund the kickbacks (er, “rebates”) to the people who do.

There are other problems at the Gigafactory, too.

USA Today also reports that Tesla has been uncooperative with Occupational Safety and Health (OSHA) inspectors.

One incident — in 2017 — involved a chemical spill. According to USA Today, Tesla managers declined to help firefighters evacuate workers from the building and were “resistant” when queried as to what kind of chemical spill had occurred, wouldn’t reveal how many workers might have been exposed and declined to say where those workers were located within the factory complex.

Tesla posts private guards at all entrances who restrict access to anyone not prior-approved; this includes first-responders and inspectors, according to the USA Today article.

In another incident, a worker’s hand was caught under a heavy battery rack, amputating part of a finger. The man, Lane Dillon, said: “When it hit my finger and I pulled it out, I knew… I was like ‘ok, something’s not there anymore. ‘”

According to USA Today, Tesla failed to report the incident to OSHA as required by law.

Inspectors have been to the Gigafactory almost as frequently as first-responders — more than 90 times over three years. USA Today says other factories in the state receive OSHA visits just once a month, on average, over the same time period.

This isn’t new, either … for Tesla.

The Center for Investigative Reporting says Tesla has “underreported injuries” at its car assembly plant in California, “failed to train workers” and even “avoided recommended safety markings because Musk doesn’t like the color yellow.”

But for some strange reason, Elon gets a pass — or at least, is treated with kid gloves. Volkswagen was practically crucified for “cheating” on federal emissions certification tests, despite no evidence of actual harm caused to anyone.

Elon’s cars and factories have caused actual harm to real people — and he just drives on.

And leaves the bill on the table.