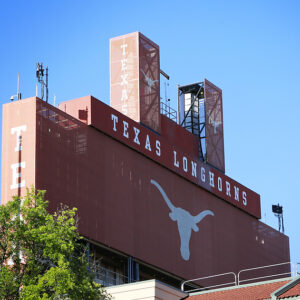 Texas Travesty All About Value System

While Texas has been embroiled in multiple controversies over its electric-power grid, the state’s marquee university has been entangled in an ugly sports quarrel involving the school’s gridiron tradition.

As in what to do about “The Eyes of Texas,” the 120-year-old Longhorns’ school song. Some concerned Texas observers have long suggested that the roots of the song can be traced to campus minstrel shows, when white performers honed their craft wearing blackface. Those same observers claim the song was derived from a supposed mantra by Civil War Gen. Robert E. Lee, “The eyes of the South are upon you,” while he was a college president. That phrase was viewed as imploring the South to maintain traditional antebellum southern values.

The gravity of the situation — especially reverberating throughout the Longhorns’ powerful gridiron community since the song is played before and after football games — was so serious that Texas officials in November formed an investigative committee, which ordered a study of school history.

On Tuesday morning, the study’s results were announced.

In summary, the key finding was this: There is no smoking gun; therefore, the song won’t be banned. According to ESPN, the 58-page report stated the song wasn’t written with racist intent. However, the report acknowledged its first public performance likely occurred at a blackfaced minstrel show. But the song wasn’t composed strictly for that purpose, didn’t represent a nostalgic longing for slavery, and originally was designed to poke fun at William Prather, the Texas president from 1899 to 1905.

As for the Lee connection, the study panel concluded there is a “very low likelihood” that “The Eyes of Texas” phrase contains a direct link to Lee. In fact, researchers at Washington and Lee University could find no evidence that Lee said “The eyes of the South are upon you” while he was the school’s president following the Civil War, the report explains.

The action steps going forward: Among the 40 recommendations from the study was a discussion of this issue to be held during campus-orientation events and alternative versions of the song to be composed/produced by black performers.

Also, students and athletes won’t be required to participate in the traditional sing-alongs of the song at games.

That last action step could be another thorny issue.

Two complaints stand out, in particular:

“It’s time for you to put the foot down and make it perfectly clear that the heritage of Texas will not be lost,” wrote one donor who graduated in 1986. “It is sad that it is offending the blacks. As I said before, the blacks are free and it’s time for them to move on to another state where everything is in their favor.”

Another email used a statistical argument to lessen the impact of black students and athletes, writing, “Less than 6 percent of our current student body is black,” wrote a donor who graduated in 1970. “The tail cannot be allowed to wag the dog . . . and the dog must instead stand up for what is right. Nothing forces those students to attend UT Austin. Encourage them to select an alternate school . . . NOW!”

This travesty in Texas essentially is a money game.

Those alumni basically are asking this question: What does the hierarchy value more at Texas — our million-dollar donations to your school or 6 percent of the student population?

The University of Texas — with a humongous enrollment of nearly 52,000 students — is more of a corporation in terms of athletics.

And there is this eye-opening stat: Black men make up only 1.8 percent of Texas’ student body — but they comprise 68 percent of the university’s basketball and football players. Those figures are findings from a University of Pennsylvania study titled, “Black Male Student-Athletes and Racial Inequities in NCAA Division I College Sports.”

“Student-athletes are not moral agents of donors or politicians and their consciences should not be shackled to the dollars or demands of those who deny or downplay systemic racism,” Dr. Calvin Schermerhorn, a professor of history at Arizona State University who specializes in slavery, capitalism, and black inequality, told InsideSources.

He added: “Part of a university’s mission is promoting freedom of conscience. As Thomas Jefferson — himself an enslaver — said at the founding of the University of Virginia, ‘This institution will be based on the illimitable freedom of the human mind. For here, we are not afraid to follow truth wherever it may lead . . . ’’’

Because of the love of money, schools such as Texas often are entrenched in a precarious game. So, what happens if potential black recruits, mainly high school football and basketball players, boycott the school because the song wasn’t banned?

One aspect is abundantly clear about those two college sports as well as the NFL and NBA: Neither game needs black fans. But they definitely need black players.