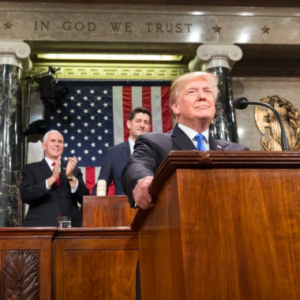 President Donald Trump delivers the 2018 State of the Union address.
[IS] Opinions

The Address That (Almost) Wasn’t: A State of the Union Quiz

For the first time, a presidential State of the Union address was rescheduled this year due to partisan politics. It’s the latest twist in an event whose history stretches back to the closing days of the 18th century.

1. Who delivered the first State of the Union speech?

2. Which president sent his report to Congress in writing, establishing a precedent that was followed for more than a century?

3. This president revived the custom of delivering the State of the Union in person to Congress.

4. This president had the first State of the Union address broadcast on radio.

5. The first televised State of the Union address was delivered by:

6. Two presidents never gave State of the Union reports because they didn’t live long enough. Who were they?

A: Abraham Lincoln and Benjamin Harrison

B: William McKinley and Warren Harding

7. The longest address (in terms of time) lasted nearly 90 minutes, including applause. It was delivered by:

8. Coming in at 1,089 words, which president had the shortest address based on word count?

9. Based on its staggering 33,667 words, which president’s address was the longest of all?

10: Which president’s address was first carried live on the internet via the House website?