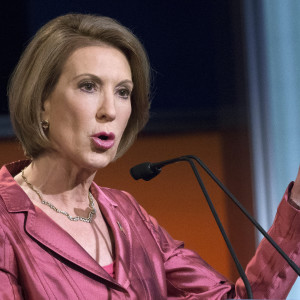 The former Hewlett-Packard CEO’s breakout performance in last Wednesday’s Republican presidential debate catapulted her to second place in a national primary poll, but it’s also brought new attention to what the New York Times called her “rocky business reputation.” Fiorina has faced criticism over decisions such as the controversial 2001 merger of HP with Compaq Computer and the layoffs of over 30,000 workers at the company. In fact, Sen. Barbara Boxer, a California Democrat, used those layoffs as a potent political weapon to defeat Fiorina when she made a bid for Senate in 2010.

If Fiorina wants her latest campaign to succeed, she’ll need to better counter the type of attacks Boxer used. She may be aided by her strong communication skills, but there are already indications that her record might be an unshakable albatross.

When Fiorina launched her Senate bid in 2009, Boxer’s allies were struck by several things right away: their eventual opponent was focused and aggressive, and she didn’t shy away from going after the incumbent from her very first day in the race. With unemployment high and voters angry, Fiorina was the kind of candidate who could pose a real threat. To make matters worse, Boxer would register less than 50 percent support in public opinion polling for most of the campaign.

Fiorina’s conservative positions on abortion, gun control, and oil drilling put her out of step with Californians, but Democrats believed her record at HP, where she was ultimately fired, was most damning. By September of 2010, Boxer began airing ads showing Fiorina defending her “massive layoffs.” Some featured direct-to-camera testimony from former employees devastated by lost jobs. Noting that Fiorina had earned $100 million for herself as she sent company work overseas, most of the spots ended with the same withering tagline: “Carly Fiorina: Outsourcing jobs. Out for herself.”

As Chris Cillizza wrote in the Washington Post last Thursday, these messages “functioned as a sort of knock-out punch for Boxer, even in a year where Republicans claimed victories all across the country.” On Election Day, the senator won a fourth term with a 10-point margin of victory.

Looking back on it, Boxer’s campaign manager Rose Kapolczynski said in an interview that Fiorina’s candidacy was built on an unstable foundation. Observing that Fiorina didn’t have any significant experience outside of business, the strategist compared her unfavorably to another famous outsourcer of jobs: former Massachusetts Gov. Mitt Romney, the 2012 Republican presidential nominee, who’s credited with turning around the Winter Olympics in 2002.

“To me, she seems like Mitt Romney lite,” Kapolczynski said of Fiorina. “She has the same problems with outsourcing but none of the record as governor or the Olympics or anything else.”

The Bain of his existence

Comparisons between Romney and Fiorina aren’t new, nor are they going anywhere.

As close followers of the last presidential cycle remember, the former governor is perhaps the original cautionary tale on the politics of outsourcing, and his experience may well be a precursor to Fiorina’s.

When Romney challenged Sen. Ted Kennedy, a Massachusetts Democrat, in 1994, the senator ran iconic ads starring laid-off workers from a company bought out by Romney’s firm, Bain Capital. Two of the Democratic strategists who made the commercials, Bob Shrum and Tad Devine, said in separate interviews that their attacks damaged Romney in one incredibly important way: they suggested he didn’t care about average people.

“What those Bain ads did was basically tell people that Romney didn’t care about ordinary folks, didn’t care about working folks, but cared only about himself and making a lot of money,” said Shrum, now a professor at the University of Southern California.

Devine, who current serves as the top strategist for Sen. Bernie Sanders’ Democratic presidential campaign, said the ads also conveyed authenticity, with real people telling their own stories in their own voices. “I didn’t put words in people’s mouths,” he said, describing his film shoot with the workers. “I asked them questions, and they answered sincerely and spontaneously.”

The workers later came to Massachusetts to picket Romney’s campaign headquarters, and that generated local press coverage that further emphasized Kennedy’s critique of his opponent.

“The most powerful thing in politics is when the paid media and the free media say the same thing at the same time,” Devine said. “When that happened, everything just cut through, and that’s really when Romney collapsed.”

To this day, Shrum and Devine are perplexed that Romney never came up with a cogent response to the Bain attacks, including during his presidential campaign. Devine said Fiorina might avoid his fate if she can contextualize her experience at HP: “She’s got to really develop that story by making sure people understand that what she did in her business record does not reflect a cold-hearted ruthless approach to jobs and people but instead a very rational and sincere approach to getting a job done in very difficult times. If she offered some reassurance about caring about people and the fact that she really is not a cold-hearted capitalist, I think that would go along way to rebutting attacks against her that are inevitable if she rises.”

Fiorina already appears to be doing some of this. At last week’s debate, she noted that she was CEO during a severe economic downturn. She then defended her record by saying she had doubled the size of HP, quadrupled its top-line gross rate, quadrupled its cash flow, and tripled its rate of innovation. “Yes, we had to make tough choices,” she said. “And in doing so we saved 80,000 jobs, went on to grow to 160,000 jobs, and now Hewlett-Packard is almost 300,000 jobs.” Fact checkers have objected to some of her comments (“Fiorina Increased Hewlett-Packard’s Sales, but Not Its Profits,” writes the New York Times), but her team insists it’s ready to prove its case.

For her part, Kapolczynski, the Boxer campaign chief, wasn’t surprised Fiorina did well last week. “She is an outstanding performer,” Kapolczynski said. “She’s a strong communicator, very aggressive, disciplined, and quite comfortable on a public stage. When you looked at that debate, there were people there like Bush, Kasich and others who have devoted their whole lives to public service, and they didn’t look nearly as comfortable as Carly Fiorina.”

Still, Kapolczynski doesn’t think voters will withhold their disapproval of Fiorina’s outsourcing just because she was operating in tough economic circumstances.

“That argument might work if you’re speaking to a business school class,” she said. “But try telling a middle-class family who’s struggling to make ends meet that it just had to be done that way, that the jobs had to go overseas because it made business sense.”

To that point, Shrum said the country is in a much more populist mood than it was four years ago, which doesn’t necessarily bode well for candidates closely associated with corporate America.

As Fiorina’s candidacy moves forward, the business press about her run may be just as important as the political reporting. One reporter who plans to be part of the conversation is Peter Burrows, author of the book Backfire: Carly Fiorina’s High-Stakes Battle for the Soul of Hewlett-Packard. A senior writer for Bloomberg Businessweek, Burrows said in an interview that Fiorina has presented a “very, very rose-colored” version of her tenure at HP.

“Broadly speaking, I would say that she was not successful in changing HP for the good, and the facts do not support the story she tells about her tenure at the company,” he said.

Burrows ultimately saw Fiorina as a polarizing figure, which makes him wonder “about her ability to create really broad coalitions” if she were elected. He also said the Compaq deal is a major mark against her — an example of how she was bold and ambitious but ultimately unsuccessful.

“She tends to go big, and that’s one of my concerns about her as president. If you’re going to go big, you’ve got to be right,” he said.