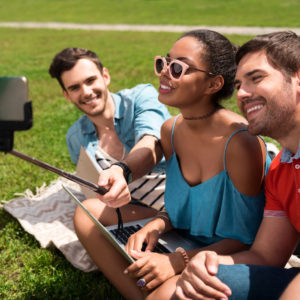 The first presidential debate between Democratic Party candidate Hillary Clinton and Republican Donald Trump covered a wide range of policy issues: everything from race relations and government regulations to the Iran nuclear deal and Trump’s tax returns. But strangely absent from what was likely the most-watched political debate in history was any talk at all about Millennials and the most significant problems facing them today. In fact, the word “Millennial” was never mentioned by either candidate, and “young people” were only discussed once (and in passing).

Not only are young people struggling to find a high-paying job, many are stuck with insurmountable debt; Millennials hold most of the $1.4 trillion in outstanding student loan debt, and the Department of Education says as of January 2016, 43 percent of all federal student loan borrowers, most of whom are Millennials, are behind on their student loan payments or are not making payments at all. This is likely why home ownership for young Americans is at its lowest level since 1965.

Despite these challenges, Clinton and Trump offered virtually no policy plans designed to improve the lives of young Americans. The one exception came toward the end of the two candidates’ discussion on the economy, when Clinton delivered a litany of broad policy goals.

“I don’t think top-down works in America,” said Clinton, referring to Trump’s proposed tax cuts. “I think building the middle class, investing in the middle class, making college debt-free so more young people can get their education, helping people refinance their — their debt from college at a lower rate. Those are the kinds of things that will really boost the economy.”

Clinton’s plan to make college “debt-free” involves providing students from families with a household income lower than $125,000 with the opportunity to attend a publicly funded college tuition-free and allowing people with student loan debt to refinance their loans at a lower rate.

While some analysts say young voters are excited by the prospect of Clinton’s “free” college tuition plan, which the Clinton campaign says will cost $350 billion over the next decade, most Millennials have already attended a college or are uninterested in obtaining a college degree. For them, there’s nothing appealing about having to pay thousands in new taxes or passed-down costs to help pay the tuition bills of people they will soon have to compete against in the job marketplace — all while continuing to pay huge sums of money toward their student loans.

Clinton says she’ll help people paying off their federal student loans refinance to a better rate, but few people will experience significantly lower monthly payments as a result of Clinton’s plan. Further, lowering interest rates would result in the government taking in less money, which means there will either be significantly more debt than previously expected added to the dangerous $19.5 trillion national debt or Millennials will have to pay more in taxes to help offset the government’s losses.

Even when Clinton and Trump discussed issues that are particularly important to younger voters, such as racism and cyber security, neither candidate managed to direct their message directly to Millennials. This is particularly puzzling considering the U.S. Census Bureau recently announced there are now more Millennials than Baby Boomers and Millennials’ voter turnout could end up being the deciding factor in this year’s election.

Millennials are becoming an increasingly important voting bloc in U.S. politics, and if Clinton and Trump don’t figure that out soon, the winner of the 2016 presidential election will end up being the loser in 2020.