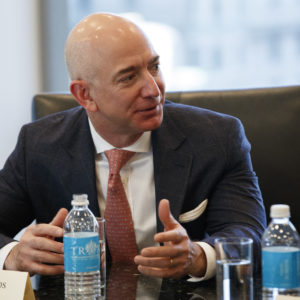 The Billionaires Versus the Politicians

Don’t look now, but there’s a bogeyman out there, and the Democrats are hot on the case. If Elizabeth Warren, Bernie Sanders and Alexandria Ocasio-Cortez get their way, billionaires will finally be forced to pay “their fair share.”

Ocasio-Cortez has called for increased taxes on their incomes, and Sanders their wealth in the form of increased death taxes. But Warren has proposed something new and unprecedented: She wants to tax their savings while they are still alive. At best, Warren’s proposal reveals a fundamental misunderstanding of basic economics. At worst, it’s a massive smoke screen.

First, the misunderstanding. Humans invented money to get around problems with barter. With money, you can save dollars over long periods of time to use whenever you want. This was a profound improvement over bartering, mostly because things like wheat, produce, meat and just about everything else humans grow and harvest go bad pretty quickly. Money is simply a placeholder for goods and services; it has no intrinsic value. It’s the goods and services money represents that have value.

Politicians always manage to miss this, perhaps because they typically provide neither. But money has become so integral to the things we do, that many of the rest of us miss this too.

When people think of billionaires, they think of Scrooge McDuck sitting on a pile of money that he more or less stole from other people, and that he simply hoards in his basement. What they should see, though, is a person who accumulated dollars by offering people things they wanted more than those same people wanted their money. A pile of money is just a bunch of IOUs a person holds until it’s time to buy something. Billionaires have more of them. Steve Jobs got his by selling us iPhones. Jeff Bezos got his by selling us damn near everything. But we sent them those dollars quite voluntarily. There is nothing evil about it.

And the smoke screen? The decades-old government debt problem about which economists have repeatedly warned politicians, and that politicians have repeatedly ignored, is now upon us. Trillion-dollar deficits are the new normal. The Social Security Administration says that, on its current course, the trust fund will be insolvent within 16 years. Irresponsibility is the order of the day, and there is no sign of that changing.

As a matter of fact, Congress is now exploring ways to make it easier to raise the debt ceiling, even though the ceiling is largely just for show anyway. What’s scary is that Congress cannot even maintain the pretense of self-control anymore. The federal government’s finances are speeding toward a mathematical brick wall, and politicians are desperately looking for someone to blame.

Elizabeth Warren and her friends in hope that voters will follow their lead and blame billionaires, or entrepreneurs, or bankers, or insurance companies, or literally anyone other than the people who caused the problem in the first place: the politicians themselves.

So ask yourself, who represents the bigger threat? The 584 billionaires who offer us things in exchange for our money, and whom we can walk away from at any time by shopping elsewhere? Or the 535 representatives and senators who take our money by threat of force?