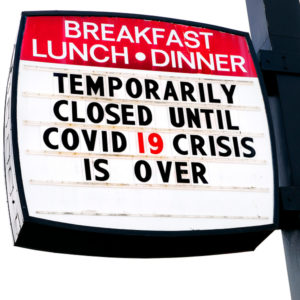 The Bleak Winter Ahead: Unemployment and a Contested Election Result

A winter of discontent looms.

Unlike Shakespeare’s Richard III, it won’t be made glorious by anything now in sight. Instead, it promises a tsunami of misery for many and the ugliest election in U.S. history.

At a time which calls for new energy, new thinking and a recasting of the social contract, two old men — who more rightly should be eyeing the sunny side of the veranda at their retirement homes — are in contentious dispute for the presidency.

Whoever wins, President Donald Trump or former Vice President Joe Biden, the winter will be the harshest in memory for many Americans, particularly those on the lower rungs of the economic ladder.

The COVID-19 pandemic has evaporated millions of jobs and the small companies that provided them. Most obvious in this slaughter are the restaurants. Yelp, the restaurant reporting service, estimates that 53 percent of the restaurants now closed will never reopen.

Restaurants are among the most fragile and perishable of small businesses. At the best of times, most inhabit an inhospitable space between the restaurant chains and their landlords.

Restaurants are quick to hire and quick to fire. It is where the unskilled (dishwashing and prep) to the low-skilled (line cooks and front staff) find work most easily.

Restaurants tell the temperature of the economy ahead of the official soundings. When business turns down, they stumble.

They also are places of hope: The chefs and waiters of today are the restaurant entrepreneurs or stage and screen stars of tomorrow. They’ve put untold thousands through college. When restaurants jobs go, hopes and dreams go, and often the life’s work of the owners go.

The individually owned restaurant epitomizes entrepreneurism, determination, the capitalist spirit and the joy of self-employment for the owner. All the virtues of small business, routinely drooled over by the politicians, are present even at the humblest greasy spoon. Free enterprise is always on the menu.

And restaurants are part of the fabric of our lives, where we celebrate, occasionally mourn and frequently refresh.

Much of what is true for restaurants is as true for the whole hospitality industry. Those who do the housekeeping in hotels, the porters and, of course, the restaurant staff are all semi-skilled and in need of work to survive.

They are, I submit, not easily re-trained: You don’t go from making beds to computer programming in a short time.

Only Congress can assuage the immediate suffering at the bottom of the employment pyramid. But a new relief package has been tied up in party strife.

Trump said Tuesday that he had withdrawn from negotiations with the Democrats over the package. Now he says he will sign a simplified measure, guaranteeing a payment of $1,200. That came after the stock market — the only index Trump follows — faltered.

Dark as things may be for the workers at the bottom, they also are bleak for all.

Trump won’t say that he’ll accept the results of the election if he doesn’t win. He’s laid the groundwork for this potential coup by criticizing mail-in voting. Without evidence, he’s sought ahead of the election to invalidate mail-in voting and has even trashed the post office, maybe to facilitate this election subterfuge.

If Biden wins, he may be presented with his greatest crisis before he is sworn in: leading the movement for accepting the vote. He’ll be required to lead the millions who may flood the streets, prompting violence between themselves and Trump hardliners.

Shiver, people, shiver. There is much to fear as winter unfolds even if you have a paycheck.

If Trump loses and accepts the result, there will be the time from certification of the election to Biden’s swearing in when an unfettered Trump can indulge his passion for executive orders, abrogating treaties and sowing wanton havoc.

The only sunshine may come from science in the form of a viable vaccine for COVID-19. This won’t occasion us to immediately strip our masks, as it will take a year to inoculate the whole population. But its prospect will put warmth into a cold Christmas.

As the nation returns to health, a hard look at the predicament of those at the bottom will be needed — an amendment to the social contract, if you will.

Top of my list: fix healthcare and repair education.