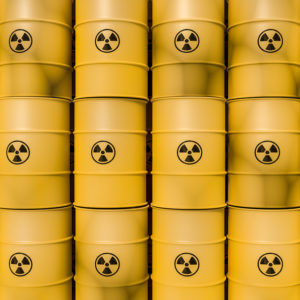 The Capitalism Cure for SNF

Lea County, New Mexico is dusty and desolate. Haddam, Connecticut is verdant and lush — a river runs through it.

The latter is not an ideal spot to stash highly radioactive metals. The former is. That’s why Holtec International, a New Jersey-based nuclear firm, picked the lonely location in the southeast corner of the Land of Enchantment to establish a consolidated interim storage facility (CISF) for the atomic-power industry’s leftovers.

Spent nuclear fuel (SNF) is boring stuff. It’s not green, glowing goo. (Real life isn’t a cartoon.) It’s tiny ceramic pellets of mostly uranium, encased in tubes. Bundled together, the tubes were once placed into a reactor, and used to heat water, which spun turbines, which generated electricity. (Nuclear energy might not have much of a future in the United States, but it still produces nearly 20 percent of our juice.)

That’s where Washington comes in — or, more accurately, Washington’s incompetence. At the birth of the industry, the federal government pledged that it would take care of atomic power’s waste. In the 1980s, legislation designated Yucca Mountain, Nevada as the final resting place for SNF. By the end of January 1998, the U.S. Department of Energy was supposed to have hauled it away.

Don’t be shocked: It didn’t happen.

Blame an unrealistically optimistic schedule. Blame bureaucratic foot-dragging. Blame the State of Nevada’s frenetic NIMBYism. (Yucca Mountain is about 100 miles northwest of Las Vegas.) Blame the Obama administration’s literally illegal cessation of the siting process. Whatever the cause(s), the deadline is more than two decades in the rear-view mirror, and there is no reason to believe that the long-planned federal repository will open in another 20 years.

So where is SNF stored right now? Right at home — at reactor facilities, either in cooling pools or in steel-canister, concrete-cask monoliths.

And you’re paying for it. With both contracts and the law governing SNF ignored, energy companies have sought relief in the courts. Starting in the late 1990s, they began to extract taxpayer dollars to cover their unanticipated storage costs. Corporate welfare? Hardly. The inevitable, if costly, denouement of a wildly unrealistic federal promise.

For the communities with decommissioned, or soon-to-be-decommissioned, nuclear plants, Holtec offers hope. Its CISF will enable local SNF to leave town for good, regardless of Yucca’s future. Haddam, still hosting the legacy of the Connecticut Yankee plant, is one of many places looking to move on. Big Rock Point (Michigan), Trojan (Oregon), La Crosse (Wisconsin), San Onofre (California), Zion (Illinois) — the list of sites waiting to be fully denuclearized is long, and growing.

But before SNF can be collected in Lea County, Holtec must run a regulatory gantlet, and face the considerable weaponry of the Luddite lobby. So far, quite good. In May, the Nuclear Regulatory Commission’s Atomic Safety and Licensing Board denied the request — made by the Sierra Club, Public Citizen, “San Luis Obispo Mothers for Peace,” and other alarmist organizations — for an evidentiary hearing. The 2001 tunnel fire in Baltimore, earthquake potential, “environmental justice,” the dunes sagebrush lizard — the board found none of the ecochondriacs’ hyped and hysterical contentions to be credible. Thus, the license-application process moves on.

But Holtec has competition. Just over the state line, in Andrews County, Texas, Interim Storage Partners (ISP) is planning its own CSIF. A joint venture of Texas-based Waste Control Specialists and French nuclear conglomerate Orano, ISP is seeking a license, too. (One guess as to how “environmentalists” are reacting.)

Whether it’s Holtec, ISP, or both, shipping SNF to the Southwest won’t be unacceptably dangerous. In 2007, a committee of the National Academy of Sciences found that when “conducted in strict adherence to existing regulations,” transportation of SNF “is a low radiological risk activity with manageable safety, health, and environmental consequences.” It will, however, be damned expensive. Holtec plans to spend billions of dollars to build out an infrastructure that could one day store as much as 100,000 tonnes of SNF.

Wouldn’t it be better if money already set aside to handle SNF is tapped, rather than taxpayers? The good news is that the Nuclear Waste Fund, established in 1982 as the revenue mechanism for a federal repository, has a balance well in excess of $40 billion. While it would require considerable time and trouble to convert that kitty into a mechanism to address CSIF expenditures, it’s an effort worth making.

The feds have bungled SNF since the start. It’s time to let the invisible hand of the profit motive replace the visible butterfingers of politics and bureaucracy.