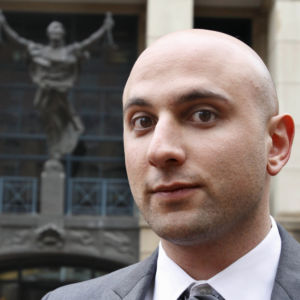 “I got people who we know have been on ISIL websites,” he said on PBS, “living here in the United States, U.S. citizens, and we’re allowed to put them on the no-fly list when it comes to airlines, but because of the National Rifle Association, I cannot prohibit those people from buying a gun.”

Even presumptive Republican standard-bearer Donald Trump joined in, tweeting that he would talk with the NRA about the no-fly list issue.

But there’s a backlash brewing to these statements, especially those from the Democrats. Liberal critics of the no-fly list itself are joining with libertarians to argue this isn’t how America should address gun violence.

The list was created at the FBI under President George W. Bush to prevent terrorism after 9/11, but it’s long been criticized as revoking civil rights of law-abiding Americans, particularly Muslims.

At Slate, Mark Joseph Stern wrote, “If the government can revoke your right to access firearms simply because it has decided to place you on a secret, notoriously inaccurate list, it could presumably restrict your other rights in a similar manner. You could be forbidden from advocating for causes you believe in, or associating with like-minded activists; your right against intrusive, unreasonable searches could be suspended. And you would have no recourse: The government could simply declare that, as a name on a covert list, you are owed no due process at all.”

Stern’s piece was quoted approvingly by the iconic libertarian magazine Reason. Editor Robby Soave argued that, on this subject, “the NRA shows more respect for civil liberties than most Democrats.”

That sentiment seems to be shared by the American Civil Liberties Union. In December, the head of the group’s national security initiative, Hina Shamsi, argued, “Until the No Fly List Is Fixed, It Shouldn’t Be Used to Restrict People’s Freedoms.”

She wrote, “the standards for inclusion on the No Fly List are unconstitutionally vague, and innocent people are blacklisted without a fair process to correct government error.”

Shamsi then agreed with Speaker Paul Ryan, a Republican, for saying “it’s very important to remember people have due process rights in this country, and we can’t have some government official just arbitrarily put them on a list.”

The ACLU praising Ryan wouldn’t come as a surprise to Gadeir Abbas, a Washington-based attorney who’s a vocal opponent of the no-fly list. Abbas, who used to work at the Council on American-Islamic Relations, sent a series of tweets on Wednesday about what he calls “the most despicable exercise of government authority.”

GOP likes to say mean things to & about Muslims the most. But both parties support mass surveillance of Muslims, watchlists, & bombing.

Re watchlist-gun debate: (1) the List includes essentially only Muslims & (2) it's based on feds predicting who will become a terrorist.

Let's admit that, when it comes to the travesty of federal watch listing, GOP is better on this issue than Dems. https://t.co/TY9MPIPcZT

Abbas is an adjunct law professor at the University of the District of Columbia, and he spoke at a strategy summit the school held for the Black Lives Matter movement in April. There, he said the no-fly list includes a disproportionate number of African-American Muslims and should be opposed by all activists.

“In order to be active,” Abbas said, “you need to be able to move, and the no-fly list prohibits that.”

Abbas also rejected the notion that the list keeps Americans safe from terrorism.

Not mincing words, Abbas called the list simply “a stupid idea” that “deserves nothing more than our ridicule and contempt.”