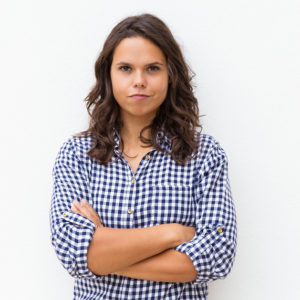 The Chip on Our Shoulder

Is having a chip on your shoulder good, bad or maybe both?

More than likely, your answer to this question depends on to which generation you belong. Millennials often value the chip, while baby boomers have very negative associations. As with many common expressions, there can be stark differences in usage and perspective, largely due to age.

Two recent stories in my life brought out the difference in how people view “chip on your shoulder.”

In story one, my son was leading a senior community writers’ group, and a participant wrote a piece about her struggle to find a job as a septuagenarian. Eventually she was hired despite ageism, and the perpetrators of this wrong received their just due. The writer landed in a good place, which was the subject of her workshop piece.

My son praised the woman’s work and also told her that she wrote best with a “chip on her shoulder.” The woman was taken aback and even offended. A whole conversation then ensued about whether it is necessarily bad to have that chip and whether my son’s comments could be understood in a positive light.

The second story involves a recent piece I published for Woman’s History Month. I profiled three twenty-something women who overcame self-doubt and anxiety as they figured out their trajectory.

These young women were part of a larger group that had written a piece for me two years back in a collection titled “At My Pace: Twenty-Somethings Finding Their Way.” I wanted to see what had transpired in their two years since penning a piece. What had they learned and to what end?

One of the young women, Anna, had experienced the pain of “imposter syndrome,” though she has since grooved a path for which she feels optimistic and committed. Anna shared, “I have a healthy chip on my shoulder, but it serves me well.” The chip was her burden of proof that she rightfully belonged to a group of achievers and no longer felt like a fake.

Interestingly, when my piece first hit (“Three Young Women Share Their Journey on the Road to Discovery”), an editor had deleted the sentence with “a healthy chip.” I suspect he thought it was overly negative in a piece that was aiming to share the progress of these women.

So we have two camps with very different views of “chip on your shoulder.” In one camp, a septuagenarian and an editor associate the chip with something negative and derogatory. In another, Anna and my son view the chip as a motivator and an attitude to be lauded.

I sought an explanation from my friend Susan, who is a copy editor and doubles as my sanity check for all things literary. She explained, “You have a chip on your shoulder when you feel you’ve been wronged. You carry anger because of it. However, it can still serve you well.”

Susan’s response belongs to the “both” camp — chips are negative at their core but can also benefit us by driving our behavior and helping us to prevail where we might otherwise falter.

If I ever needed more proof in the value of a chip, I need look no further than the recent news that Tom Brady, the greatest quarterback of all time, was founding a company called “199 Productions.” Brady’s company will develop content that will probably be motivational.

As Brady writes on Instagram, “When I was the 199th draft pick in 2000, I knew I needed to work hard every day to prove myself.”

Rather than wondering whether the chip on our shoulder is good or bad, (or both), maybe we should be asking ourselves, “What do we do with it?” It goaded Tom Brady to greatness.

For those of us who might relate better to writers than quarterbacks, think Herman Melville, whose masterpiece, “Moby Dick,” was rejected so many times that he paid for typesetting and plating himself. Surely, he must have had a big chip on his shoulder.

Bottom line: Let’s claim our chips and put them to good use.

Etymology of “Chip On Your Shoulder”

The phrase “a chip on one’s shoulder” is reported as originating with the 19th-century U.S. practice of spoiling for a fight by carrying a chip of wood on one’s shoulder, daring others to knock it off… This relates to working practices in the British Royal Dockyards in the 18th century. — From  www.phrases.org.uk