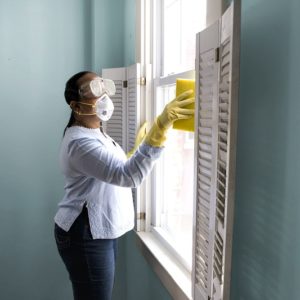 The Chronicles of Household Cleaning

I need to start with an admission. I have been wrong to refer to Helga, the woman who has kept our house clean for decades, as the “cleaning lady.”

I know now that she is, in fact, a “cleaning professional.”

That I didn’t sufficiently appreciate her expertise at the time has never diminished my appreciation for her as a person. She is respected and loved by every member of our family in our 28-year relationship. But, we did not see the miracle of her cleaning methods. That is until now.

In March, Helga and I agreed that she would not come to our home during this period for everyone’s safety. This now left my husband and me at the helm of home hygiene.

Here is how our cleaning chronicles have gone (and it hasn’t been pretty):

Me: “I will do kitchen counters, stovetop, dining room surfaces.  You focus on the floors.”

It seemed simple enough, but issues did arise. I was asked whether Helga removes all the chairs and places them elsewhere to clean the floors. Does she sweep before vacuuming or mopping? Do I recall whether she changes the attachments between carpet and wood floors?

In the meantime, I realized that the patterned granite counters can easily hide dirt and that I needed to use my fingers to feel and unstick the crumbs. On the stovetop, I had swipe marks where I had cleaned. Helga never has swipe marks.

After an hour of “cleaning focus” and physical exertion, we decided it was “good enough” and recovered by watching Netflix.

But wait … I suddenly remembered that the stairs weren’t vacuumed, nor was the vestibule.

Me: “Steve, is it too late to do two areas — the stairs and the vestibule? Helga always does those areas.”

Sigh, resignation, and at least we’ve got started.

We added the stairs, the bathrooms, changing the sheets, and wiping down more kitchen appliances. Again the questions:

Steve: “Do you know which attachment Helga uses for the stairs?”  (“No,” but it didn’t matter because Steve figured it out.)

Me: “I am not liking the way the kitchen floors look after we are done.”

Steve suggested we address the kitchen floor’s lack of shine the following week, which suited me too. I still had lots of cleaning left on my list.

Steve: “How does Helga wash the toilet bowl?”

Me: “She uses the wand with the disposable cleaner.”

Steve: (After finding the cleaning tool) “Do we have the box it came in so that I can read the instructions?”

This is actually not a stupid question. There is a way of discharging the wand’s disposable, as well as guidance on how many minutes to leave the cleaner in the bowl. Steve figured it out — no help required.

Me: “Don’t forget the counters and sink in the bathroom.”

Steve:  “Of course.” (This would suggest that our standards of cleaning were becoming obvious.)

I proceeded to change sheets and realized why Helga prefers one set over the other.  One fits easily, whereas the other is like a tug of war. Why didn’t I know this before?

We continued to do everything we did in the earlier weeks but added “something” to up our game. This week we added shine to the floors and washed the seldom-used bathtub. We always start with a discussion of tools.

Me: “Steve, what do you think I should use to help shine the floor?”

Steve: “What does Helga use?”

Me: “Helga has her own makeshift tool — a mop stick connected to a plastic rectangle with a towel wrapped around it.”

I explain how the towel is rougher than a foam cushion typically on the end of mops, and Helga believes she can get a better cleaning. So I try to do the same, though it’s not the same. I pour too much of the floor shine on the first designated spot, and then later, I pour too little.

The result: the floor looks better but not Helgaesque.

Now between weeks three and four, my son starts our vegetable garden. This is good news except that dirt comes into the house via shoes and our two dogs who appear to love being his garden accomplices. This means they eat dirt while he tills.

After noting the new dirt, I do my husband’s job of vacuuming. We use a canister vacuum that seems to know where I want to go and beats me to it. I am left making sure that I don’t trip or get wrapped within the cords.

We have since added dusting, along with purging and organizing. We are not good at this, though we are getting slightly better. Some combination of technique and pride of a job well done should get us there.

I could feel humiliated by this adventure, but I turn the experience into something positive. I make myself a promise. I will forever refer to those who clean the spaces in our world as “cleaning professionals.” Because that is what they are.

When that moment comes, I will welcome Helga back with open arms (if I am allowed), but will, of course, resist the handshake. I just hope hugs are back in.