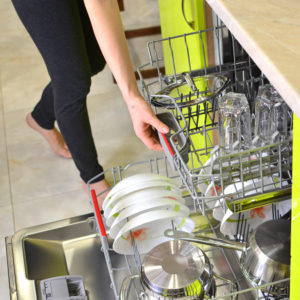 Weeks of comparing models with all kinds of fancy features. A spreadsheet filled with manufacturer guidelines, specifications, and descriptions of what gets washed in each kind of cycle. More weeks spent scouring big-box store ads for sales and special deals. Finally, the stars align and you buy it – your first brand, new dishwasher.

Dinner that night is a culinary feast for the ages – baked rigatoni-and-sausage with extra cheese, some leftover pot roast with mashed potatoes heated up in that non-stick pan-of-last resort, and a homemade pie with gooey, bubbling cherry filling that flowed over the tin like lava streaming from a volcano. What a glorious mess, you think as you gleefully fill up the dishwasher, carefully measure out the detergent and press the buttons to begin the cycle.

You marvel at how quiet the appliance is. You giggle a little as you use your toe to cover and uncover the red dot on the floor that indicates the machine is running. And then you wait. And wait. And wait.

If you bought a Whirlpool, Maytag, GE or any other dishwasher manufactured and sold in the U.S. in the last five years, you could be waiting up to four hours before that washing cycle stops. Even then, there’s no guarantee your dishes are clean.

“I had a technician come out to see why it took 6 hours to go through the cycle along with not cleaning the dishes well,” wrote Sun from Kansas City, MO, in a consumer complaint about her Whirlpool dishwasher. “He said I needed to run hot water before starting the cycle and that I needed to prewash my dishes before loading.”

“I am currently in the process of hand washing a number of dishes that did not clean in last night’s 4-hour cycle,” Dana from Dripping Springs, TX, wrote about her Whirlpool.

“The cycles run FOREVER,” according to Sara E. of Dallas, who invested in a Samsung appliance. “Plan on letting it run all afternoon before your dishes are ready so you can use them for dinner!!”

“Not only does this dishwasher take over two hours to cycle through, it has NEVER cleaned the dishes,” wrote Joanne of Safety Harbor, FL, of her Samsung. “We basically have to wash the dishes before we use it and then use it on the heavy and sanitize cycle.”

Those are just a handful of more than 2,300 comments and complaints collected by Consumer Affairs about lackluster dishwasher performance.

The cooked on, baked on, left-to-sit-on-the-counter culinary debris has thumbed its collective crusts at modern dishwashers, and the machines are just not up to the task since the Obama Administration revised energy and efficiency standards in 2013 and turned your Whirlpool into a wussy.

Two years later, manufacturers tried to push back against the regulations that doubled cycle times without improving cleaning power. A March 2015 letter from GE to the U.S. Department of Energy tried explaining that the proposed rules were based on “flawed assumptions” and risked “creating a standard with negatives on consumers … and on the viability of dishwasher manufacturers.”

The Association of Home Appliance Manufacturers also delivered a 38-page missive that could have been inspired by George Foreman for all the blows it landed, although Foreman was likely too busy scrubbing his grills to contribute. The proposed rule would “not pass judicial muster” and “this rule making has been badly handled and is fatally flawed,” the letter stated. The proposal was “developed … behind closed doors” and the Department of Energy “unilaterally authorized itself, through improper application of its own guidance” along with “abuse of proper procedure.”

Enter the Competitive Enterprise Institute (CEI) and its never-ceasing war against burdensome, wasteful and sometimes pointless regulations. These warriors wield legal briefs like the crusader knights of old swung their broadswords, unyielding against the merciless red tape of their foe – the creaking, hulking, overreaching bureaucracy now overgrown and bloated. For example, the “Technical Support Document: Energy Efficiency Program for Consumer Products and Commercial and Industrial Equipment: Residential Dishwashers” runs for nearly 500 pages. It would take about as long to read that as new dishwashers take to clean pre-soaked, pre-rinsed dishes.

Led by staff attorney Devin Watkins, CEI petitioned the Department of Energy to create a new class of dishwashers that could complete a full wash cycle in under an hour and allow higher water and energy usage as a feature. This would override the much-maligned rule that capped the amount of energy and water dishwashers could use in a given cycle, which thus capped the cleaning power of the appliances and ratcheted up consumer dissatisfaction.

At first bending and then bowing to the pressure and overall common-sense proposition, the Department of Energy threw in the (slightly soiled, but that’s a whole other machine with its own set of regulations) towel. It will begin the rule-making process to potentially overturn its previous rule. The department did strike one blow for bureaucratic nonsense. It will handle the proposition in two phases – first through an open comment period and then a second period in which a new rule may be decided.

Still, in the land of regulatory battles, this is a big win. Although, as Watkins dryly intoned, “We would prefer they do this in one cycle.”