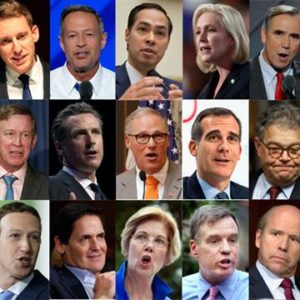 Biden Becomes The 21st Democrat To Enter Race. Is The Field Finally Finished?

Biden’s entrance into the race was no big surprise (though an announcement video that featured images of a swastika was a bit unexpected –see above). And while his first-day fundraising haul of $6.3 million was the biggest ever, his opponents are quick to point out much of it came from high-rollers and Establishment insiders, not grassroots, online donations.

Still, Biden’s in, Bernie’s bashing capitalism, Warren’s playing Oprah, Buttigieg is breaking out of the pack and the race is on. So now people are asking: “Are we done? Is that it?  Is the Democratic field finally set?”

And the answer is…we don’t know.

An updated list of both the declared and potential 2020 candidates is below. Despite reports that there are 20 declared candidates, in fact it’s 21 (many media outlets leave out former Alaska U.S. Senator Mike Gravel). But there are also some names still on the “might get in” list. Among them:

CO Senator Michael Bennet: He’s fighting prostate cancer, but he may still get in the fight for the presidency, too. He’s considered one of the Democratic moderates in the field.

NYC Mayor Bill de Blasio: The uber-liberal mayor and Green New Deal fan continues to tease a possible run, and being the mayor of America’s biggest city certainly gives him the platform.

Montana Gov. Steve Bullock: He’s the Democratic governor of a state Trump carried by 20 points. Does he have the magic to make the White House Democratic again?

Former MA Senator John Kerry: He’s never quite said “no.”  Or maybe he was for it before he was against it?