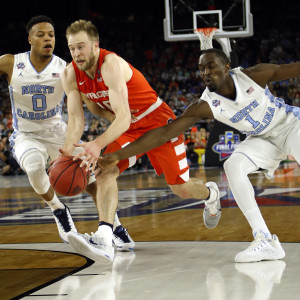 The Dirty Side of March Madness

Each year, The Institute for Diversity and Ethics in Sport releases an academic report ranking the final 16 teams in the big-money NCAA Tournament from best to worst. That means this month’s Final Four teams rank, in order:

Villanova is No. 1 with a Graduation Success Rate of 100, in a four-way tie overall.

North Carolina is next with an 80 GSR, for No. 8 overall

And Syracuse with a lowly 55, for 14th overall.

Now, some explanatory information: the GSR, implemented in 2005, is designed to provide an accurate measure of graduation performance by tracking student-athletes for six years after their admittance into an NCAA member school. The measurement used available data through the 2013-14 academic school year.

In effect, Villanova would have been a No. 1 seed in the Sweet 16 based on the GSR academic concept. In fact, based on The Institute for Diversity and Ethics in Sport (TIDES) study, the top four seeds would have been Villanova, Duke, Notre Dame and Kansas, all with a GSR of 100.

Dr. Richard Lapchick, director of TIDES, chairman of the DeVos Sport Business Management Graduate Program at the University of Central Florida and lead author of the study, mentioned in his findings that “there are 10 women’s and six men’s teams with GSRs above 90 percent. In addition, 94 percent of the women’s teams and 81 percent of the men’s teams graduated at least 60 percent of their basketball student-athletes.”

But that doesn’t tell the whole story. Despite all of this hoopla, for some, there’s also March Sadness in the man’s world.

North Carolina has been the focus of a seemingly interminable NCAA investigation for academic fraud involving violations committed from 1993 to 2011. In March 2015, Syracuse was cited for a litany of infractions, ranging from academic misconduct to violations of drug-test policies to impermissible benefits. A scenario that caused the NCAA to suspend Syracuse head coach Jim Boeheim for the first nine Atlantic Coast Conference games of the 2015-16 season, including a stipulation that barred him from contact with his players.

As a result of the transgressions, dating back to 2001, Syracuse also lost three scholarships each year for four years. Boeheim was forced to forfeit 108 wins on his coaching record (not including Syracuse’s 2003 national championship), and in an effort to take a sting out of the hornet’s nest to impress the NCAA, the school penalized itself with a self-imposed postseason ban in 2015.

North Carolina’s controversy centers on the school’s African and Afro-American Studies department, focusing on classes comprising a heavy enrollment of student-athletes from multiple sports, including basketball. They were labeled as “paper-only, no-show” classes in that students didn’t meet on a regular course basis and were asked merely to submit a “paper” — which could be just a simple paragraph —- for a high grade at its conclusion.

And it gets only worse: Several former North Carolina student-athletes from multiple sports, in the spring of 2015, sued UNC, claiming the school failed to adequately educate them, thereby preventing them from procuring meaningful jobs.

One of the lawsuits stated: “For the last 18 years, from 1993 through at least 2011, UNC, widely regarded as one of the nation’s elite public institutions of higher education, systematically and purposely failed to educate many of its students, and particularly its student-athletes, by enrolling them in hundreds of sham courses — sometimes in the guise of lecture courses and sometimes in the guise of independent study courses — that involved no professional involvement, offered little rigor and no real education.”

Some student-athletes asserted that they yearned to declare majors in rigid disciplines, such as computer science and pre-med, but were steered instead to less challenging courses as a way to ensure their playing eligibility. Not a good look in Chapel Hill, N.C.

While Syracuse already has been issued its slate of sanctions, North Carolina still awaits its fate in the penalty phase. During the Elite Eight of the NCAA Tournament, which flaunts a 14-year, $10.8-billion television deal with CBS and Turner networks, NCAA President Mark Emmert told USA Today, “Sometime in the relatively near future we’ll move toward a resolution,’’ without suggesting a deadline.

Some have suggested that big-time, revenue-producing, college student-athletes should be allowed to major in their respective participatory sports. Then, we likely wouldn’t be inundated with incidents of academic fraud or eligibility conundrums. Really, what athlete would flunk out of his own sport.

Under that format, Syracuse probably wouldn’t have been embarrassed on a national stage and North Carolina wouldn’t be wondering if it still can attract blue-chip high school stars who are distracted by concerns that UNC could face stiff NCAA punishment that negatively affects their marquee value.

Salacious scenarios never end in major-college money sports. Each spring, we engage in this hand-wringing about what’s wrong with college basketball. We turn to the sports scandal sheets while striking a musing gaze of “We thought we had seen it all.” Apparently not.

Perhaps, that’s the real reason we call this annual exercise March Madness … with a smudge.