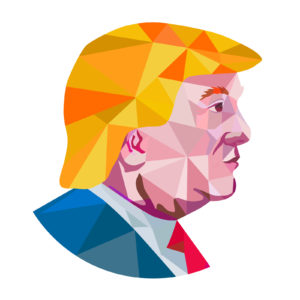 The Donald Trumps the Process

Late Tuesday night, Trump performed the political version of a young, inexperienced and brash Cassius Clay surprising the old guard Sonny Liston to capture the heavyweight boxing championship of the world on Feb. 25, 1964, in Miami.

After he subdued Liston, Clay screamed to anyone who would listen, “I shook up the world!”

New blood in the fight game.

Now, there’s a new and most unlikely face joining a historic list of U.S. leaders — names such as George Washington and Abraham Lincoln.

Can you believe it? Trump followed Clay (a/k/a Muhammad Ali) in shaking up the world (just check the global stock markets).

On Tuesday night, Trump, the 70-year-old brash novice, won in Florida, too, garnering 29 electoral votes, which helped propel him past Washington veteran Hillary Clinton, to put an end finally to a most divisive, contentious and sometimes raunchy election campaign cycle.

After Hillary conceded, Trump, unlike Clay, exhibited more humility than bluster during his victory speech in the wee hours of Wednesday morning:

“Now, it’s time for America to bind the wounds of division, we have to get together. To all Republicans and Democrats and independents across this nation, I say, it is time for us to come together as one united people. I pledge to every citizen of our land that I will be president for all Americans, and this is so important to me.”

Trump won Tuesday night — fair and square. And his beaming surrogates — from Kellyanne Conway to Jeffrey Lord to Corey Lewandowski — had told us what to expect all along for nearly two years. Many of us scoffed at their expectations. Now, they can say: “We told you so.”

With that, Trump is to Clay, as Clinton is to Sonny Liston.

For weeks leading up to the election, the television networks’ computer models and analytics data favored Clinton to make history in becoming the first female president in U.S. history. She may have won the analytics projections. But Clinton apparently didn’t pass the eye test to much of America’s voting populace.

So, analytics be damned. They obviously didn’t measure what was deep in the hearts of many Americans.

—Many Americans and cable television networks overwhelmingly underestimated the national disdain for Hillary Clinton and all her obvious flaws.

—In hindsight, Clinton publicly labeling half of Trump’s supporters as “deplorables” may have been a death knell for her.

—The volume of closet Donald Trump supporters — white, black and Hispanic — was way more than most Americans, the national polls and many television pundits could measure.

Those hidden Trump supporters sent a wallop of a message. Upside the head. Now, Trump has a chance to make his constant mantra ring true: Drain the swamp. As in transform Washington.

Will Trump be effective in the swamp drainage. Who knows? More important, does the enigmatic Trump really want the job of president of the United States?

Again, who knows? Not sure if he really knows.

Can a reality television star and billionaire real-estate developer saddled with a sketchy past and inflammatory verbiage really take command of the Oval Office? Who knows?

But one aspect of this bizarre election cycle we know for sure is simply this: Donald Trump winning the presidency is an indictment against Barack Obama, the outgoing president who was consumed in trying to maintain a semblance of his legacy.

Obama supposedly had a 55 percent approval rating, an unusually high figure for a president closing out his second term. Trump’s victory makes you wonder about the validity of Obama’s approval figures.

The man who espoused hope and change is being followed by a self-professed swamp drainer. That sounds like a sharp rebuke to the Obama Philosophy from this vantage point.

Hillary and her stunned supporters undoubtedly are spellbound right about now. Wondering what the hell just happened. Wondering how Trump could rewrite the rules of the political game.

Trump tapped into the emotions and anxieties of white working-class voters to vault himself into the White House, in a parting-of-the-sea change that amounts to the U.S. version of Britain’s Brexit. Like Richard Nixon nearly 50 years ago, Trump spoke to a Silent Majority. Nixon won with that group in 1968; Trump repeated the feat on Tuesday night.

A huge question facing Trump is will he REALLY attempt to heal the nation’s political chasm. Will he actually reach across the aisle and extend an olive branch to Hillary Clinton and her ardent supporters in an effort to bridge their differences. Remarkably, he probably has to do the same to some fellow Republicans.

And what about a mountain of polarizing issues facing the new president-elect? Such as the trade deals, Obamacare, climate change, Middle East chaos, GDP growth stagnation, wage anxiety, counter-terrorism, racial strife, policing tactics, immigration overhaul. The list goes on and on.

Is the erratic Trump really up for the challenge, even with both a Republican House and Senate? Again, who knows? But Trump, at the very least, deserves a chance to show his wares.

After his presidential takeover late Tuesday night, Trump did say, “For those who have chosen not to support me in the past, of which there were a few people, I’m reaching out to you. For your guidance and your help, so that we can work together and unify our great country.”

Like it or not, as Clay in 1964, Trump sure packed a powerful, winning punch in a high-stakes competition. That much, we know … now.