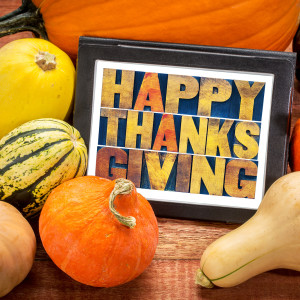 The Economic Importance of Thanksgiving

Thanksgiving celebrates human cooperation. And even though the European colonization of America was not exactly a cooperative venture, the inaugural 1621 Plymouth Thanksgiving feast certainly was. That historical reality reminds us why Thanksgiving is worth celebrating today — that one of humanity’s best traits is our ability to take something dark and make it bright.

This Thursday is an opportunity to give thanks for a wonderful fact: In all of human history, there has never been a better time to be alive than right now. This might seem an odd thing to say at the moment. War, terrorism, poverty, political repression and hunger still plague many countries. The most recent wounds, inflicted in Paris, Syria, and elsewhere, are still fresh.

But life is improving in unprecedented ways.

Over the last century or so, the typical American’s income has grown sixfold. Life expectancy increased 30 years during the 20th century, from 47 years in 1900 to 77 in 2000. Infant mortality went down by more than 90 percent over that period, from roughly one in 10 to less than one in 100. Just think of all the broken hearts avoided. Nutrition and health care improved so rapidly that the typical American in 1950 was three inches taller than in 1900. Today’s Americans are taller still.

This Great Escape from poverty, as Nobel-winning economist Angus Deaton calls it, has been going on for the last two centuries. We and our children are only the most recent beneficiaries. Before that, most people, even the ones who lived in the richest, most powerful countries on earth, had an average income of around $3 a day. Today, average income in rich countries is more than $100 a day.

Louis XIV’s Versailles, for all its extravagance, did not have flush toilets. Ramses II, Julius Caesar and Henry VIII did not have air conditioning. They did not have TV, newspapers or electricity — let alone computers or the Internet. Today, even the poorest Americans enjoy all of those things, which are so commonplace we barely even think of them.

Napoleon Bonaparte nearly conquered Europe. But even at the peak of his powers, he could travel no faster than a horse’s gallop. Today, anyone can move twice as fast as Napoleon ever did by simply hopping in a car. Every day, thousands of ordinary people fly through the air at hundreds of miles per hour in airplanes, nearly six miles up in the air, in climate-controlled comfort. The list goes on.

As you sit down to Thanksgiving dinner with your family, consider a thought experiment. Ask your parents and grandparents about what times were like when they were young — no cable television, no automatic transmissions, no Internet.

Then turn to your children, nieces, nephews and grandchildren, and tell them about your own memories of life before smartphones — when having access to a camera, email, text messages, news alerts, maps, music and movies in a single device seemed unthinkable.

And these days, the world has something else to be thankful for.

While Europe and America have been comparatively wealthy for some time, they are no longer alone. Post-war Asian tigers such as Hong Kong, Singapore and Japan have become just as rich. In China and India, home to more than a quarter of world’s population, hundreds of millions of people are lifting themselves out of poverty. And much of Africa, after centuries of hard times, is showing signs of hope.

That is perhaps our biggest reason to give thanks: Eventually the whole world will have enough to live with comfort and dignity. So long as people are free to cooperate and exchange with each other on their own terms, it could even happen in our lifetimes.