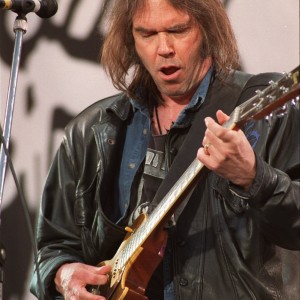 When Donald Trump descended the escalator into the lobby of his Manhattan skyscraper and launched his presidential campaign this past June, the soundtrack to the spectacle was unusual, especially for a Republican. Neil Young’s “Rockin’ in the Free World,” a 1989 protest song criticizing President George H.W. Bush, blared from the speakers — and it generated the first of countless controversies in the businessman’s bid for the White House.

Young, an outspoken liberal and supporter of Democratic presidential hopeful Bernie Sanders, quickly objected to Trump using the track without permission. The real estate mogul agreed not to play it again, but not without calling Young a “total hypocrite” for raising the objection after asking Trump for money to fund an online music service.

Of course, Trump embracing “Free World” was a bit incongruous in and of itself. As an opponent of the 2003 Iraq invasion, he might have sympathized with its anti-war message — and he certainly has no great fondness for the Bush family — but it’s not like he identifies with the song’s critique of consumerism. Trump’s the embodiment of capitalist excess, a man who literally erects monuments to himself around the world. He’s not joining Young in lamenting “department stores and toilet paper.”

Obviously none of this made a difference for the mogul. (The flap over his song choice was easily overshadowed when he declared immigrants coming across the Mexican border to be “rapists” bringing drugs and crime.)

Still, as Neil Young turns 70 today, it’s worth making one more note about “Free World”: the track has remained remarkably relevant to American politics since the  late 1980s, and there’s every indication it’ll continue popping up in the future.

‘A thousand points of light — for the homeless man’

As Rolling Stone reported, Young’s song initially gave voice to liberal discontent with George H.W. Bush’s election following two terms of Ronald Reagan, even as the track also “became a rallying cry in post-Reagan America for ‘American values’ and the fall of communism”:

[Bush] optimistically referred to America’s “Thousand Points of Light” and during the Republican National Convention he talked about a “kinder, gentler nation.” Young flipped those hopeful words into the brilliantly sarcastic lines, “We’ve got a thousand points of light/for the homeless man/We’ve got a kinder, gentler/machine gun hand.”

The song also drew an explicitly partisan contrast between Bush and Jesse Jackson, who ran in the 1988 Democratic presidential primary. Referencing Jackson’s campaign slogan in that race, Young crooned, “Got a man of the people/says keep hope alive.” His rejoinder to this line was telling in its fatalism: “Got fuel to burn/Got roads to drive.”

In 2004, Michael Moore breathed new life into “Free World” by playing it over the ending credits of Fahrenheit 9/11, the liberal filmmaker’s cinematic case against President George W. Bush. The film was a major political football, condemned at the Republican National Convention and celebrated by the anti-war movement rallying behind Democratic White House hopeful John Kerry. Young released a special edition single of his song for the movie, and Moore subsequently directed a new topical music video for the track:

Following Kerry’s loss, Young’s anti-Bush activism intensified. His 2006 album, Living With War, featured the song “Let’s Impeach the President.” Another track, “Lookin’ for a Leader” included the line, “Yeah, maybe it’s Obama,” and foreshadowed the 2008 Democratic presidential primary fight between the then-Illinois senator and then-New York Sen. Hillary Clinton: “Someone walks among us / And I hope he hears the call / And maybe it’s a woman / Or a black man after all.”

The leader Young is looking for in 2016 may be the only person who actually benefited from the Trump episode back in June: Vermont Sen. Bernie Sanders. Following an event that month at the University of Denver, the senator’s campaign issued a press release celebrating how “Free World” had played “as Sanders was introduced to the standing-room-only crowd that spilled into an atrium and a nearby lacrosse field.” Unlike Trump, he has the appropriate liberal record to match the song’s lyrics. And having secured Young’s blessing to use the track, he’s set to keep on rockin.’