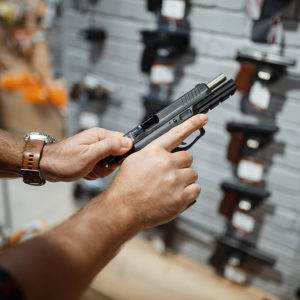 The Fight Against Gun Proliferation May Seem Hopeless; It Is Not

The decision to strike down New York’s law limiting guns in public appears to be an almost fatal blow in the war to reduce gun violence. It is a significant setback. But the battle has never been likely to be won at the federal level or through the Supreme Court. The struggle can change only at the cultural level, a long-hard fight.

Twenty-seven states are deeply committed to lenient gun laws and are unlikely to change. The remaining states must work harder to minimize the gun culture that feeds our national malaise. It is not a perfect answer, but it can make a meaningful difference.

States that have already enacted strict gun laws, such as Hawaii and Connecticut, have demonstrated that change is possible. These two states have one-seventh the number of gun ownership as lenient gun ownership states like Mississippi.

Concomitantly, they have one-seventh per capita gun-related deaths as well.

The difference between these two extremes is not simply the number of guns. It is also the culture that permeates and propagates the proliferation of firearms. That culture consists of gun shows, boundless gun stores, gun-promoting billboards, and manufacturer’s advertisements emphasizing gun ownership as manly. Together, they feed a comfort and a perceived need for gun ownership.

Take billboards, for example. Guns advertisements on billboards are standard in much of America. High-powered military automatic guns highlight and often advertise testosterone-laden weapons. Messages such as “BE A MAN AMONG MEN” proliferate the gun world, primarily targeting young men. There is an absence of counter-messaging in this impressionable group.

An internet check shows that there is a gun retailer within easy driving distance of virtually every American. Nationwide there are 50,000 more gun shops than McDonald’s.

Gun shows are essential in creating guns’ availability and devotion to owning unique and powerful weapons. There are more than 5,000 gun shows annually in the United States.

These elements create a feeling of normality, a sense that weapons are necessary for protection, as if guns were as American as apple pie. They are more common than apple pie. Between 2000 and 2021, background checks for gun purchases have risen from 8.5 million to 38.9 million.

Our nation’s gun addiction was like our devotion to cigarettes 70 years ago. At the time, it appeared unimaginable that smoking habits would change. Forty-five percent of Americans were addicted, and the forces maintaining that poison were significant. The tobacco industry was robust and fully supported by tobacco-growing states. Today, fewer than 12.5 percent of Americans smoke, and the habit among young people is still less.

How did that happen? No one action but an aggregate of laws, corporate policies and societal pressures. Tobacco became heavily taxed. Places available to smoke, such as work and public settings, prohibited smoking, and cigarette machines became less common. Advertisements emphasizing the dangers of smoking became widespread, and age limits were imposed on cigarette purchases. The high profits of tobacco companies were widely publicized. This aggregate made the difference.

A comparison between guns and tobacco is far from perfect, but it does demonstrate that highly embedded habits can change.

Expecting politicians from lenient gun law states to vote for strict gun policies is unrealistic. The legislators are following their constituents’ wishes. They would be removed from office if they supported strict gun law legislation. Their votes will not change until their constituents’ views change. Those views have become codified by gun culture.

With such formidable factors supporting gun ownership, it seems wise strategically to focus on states open to strict gun laws where change is possible.