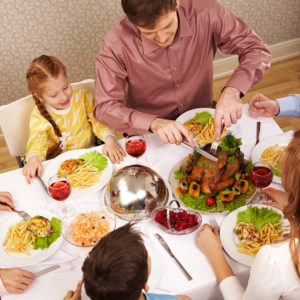 The Future of the Family Dinner Hour

I grew up in a family that ate dinner together every night. I remember seeing my father feel crestfallen when Humbert Humphrey lost to Richard Nixon in 1968. The margin of loss was small (.7 percent of the popular vote), and as a family, we had the opportunity to digest why my dad cared so much.

We watched Humphrey’s gracious concession speech where he used the French expression, “comme ci, comme ca,” and my dad had to explain what that meant to me. I was 11. Dinner that week was spent discussing Humphrey’s loss. I understood at that young age that politics mattered and that engagement was our civic responsibility. I also understood that Humphrey was a man of dignity and positivity, both of which earned my father’s respect.

On some evenings my Bubbie would join us at dinner. She had immigrated from eastern Europe in 1907, and she was a strong and spirited character. There is little as charming as bringing Old-World values into contemporary America, spoken with a thick Yiddish accent. My Bubbie would say, “I hear in America, girls can become teachers.” This was her subtle way of encouraging me to have ambitions.

Dinnertime was also spent sharing daily happenings. My brother dissected a worm and decided he wanted to be a doctor, like Marcus Welby, whom he watched nightly. True to his word, he became one. My oldest sister became a voracious reader who filled her days reading book after book and encouraged her younger siblings to do the same. She changed her dreams on us—from wanting to become a “hairdresser” to that of a teacher who could inspire students to love reading. That she did.

Sports was a popular topic. We were Broncos fans. Would this be the year the Denver Broncos, perennial cellar dwellers, could finally contend? The debate was often contentious and very loud. I always believed it would be their year of greatness, and my nay-saying brothers had a million ways to squash my hopes. Eventually, Hall-of-Famer John Elway came to town and delivered on my dreams. Then I could do an “I told you so.”

All these memories, and more, remind me of how formidable our dinner hour was in shaping our family. It was anchoring, enlightening, and bonding. Because there were six opinionated kids around the table and some parents who had something to say too (and throw in a Bubbie), I learned to be a fast talker—a habit I’ve kept to this day.

I contrast the dinner hour I grew up with to the dinner hour now. Our kids are grown but were they around, we wouldn’t have the same experience.  And “hour” is a misnomer too. Data vary regarding how long Americans spend at home at the dinner table, but the most recent statistics show dinner is between 15 and 30 minutes long. For fast talkers, it’s probably fine.

The bigger problem is that dinner happens far less frequently. A recent study at the Harvard School of Education estimated only 30 percent of American families eat dinner together.

If one is looking for some positivity, irony of ironies, COVID provided it. Since its arrival, families eat together more often. According to Forbes, 54 percent of families reported sitting down to dinner together nightly during the pandemic.

Whatever the specific numbers, it’s not enough. There is a firm view by professionals, parents, and even children that dinner is an important moment in their day. Pediatricians and mental health experts stress the many health benefits. Parents find it a convenient time to stay in touch and offer guidance. Kids can let off steam.

One more compelling argument for the value of dinner concerns our ability to comfortably state our views in public. We live in a time where it is hard to express our opinions and not risk offending someone. The Cato Institute reports 62 percent of Americans have views they are afraid to share in public.

Self-censoring has become standard behavior. And yet, everyone needs a place where they can safely explore ideas and share views. To this, I say, bring back the dinner hour.

Since the start of COVID, I’ve had a fancy for criminal detective and police procedural dramas. After a time, they can run together, but only one ends each show with the characters rehashing their day over dinner. It is for that very reason that “Blue Bloods” remains one of my favorites.