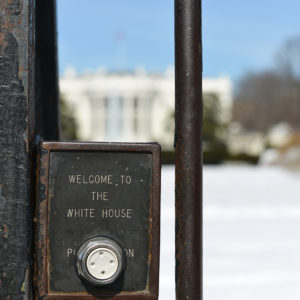 The Gatekeepers Are Running the Government

There must be a special place in hell for the gatekeepers — with a special circle for the Washington gatekeepers. These nonentities man the gates in Washington and, by design or simple obduracy, pervert the purposes of government.

They also fuel the lobbying industry. The name of that game is “access” and it is sold openly. If you have worked on Capitol Hill, or in a Cabinet secretary’s office, bingo! You have access.

Chances are the general public, journalists or others who need to speak to the principals, whether elected or appointed, will not get a look in because of the gatekeepers: those busybodies who take it upon themselves to affect things by blocking messages or meetings.

In Washington at present, the gatekeepers have more power than I have seen in 50 years. You have the constitutional right to petition your elected and appointed officials. But that right is abrogated if you cannot get through the door.

That is where the lobbyists come in; they can get through the door and influence the principals.

None of this is new, but there is a new dimension. Time was when you could get into federal buildings and walk around. That meant you had a chance of literally bumping into people you might want to buttonhole. Now surly guards demand appointments and IDs. A chance encounter with an assistant secretary is no longer in the cards.

There are channels that are harder for the new face to navigate than for those who have access. As most of us do not have this means of entry, we must settle for not being heard or getting routine rejection from the staffer manning the gate.

I have never known a time when the bureaucracy was so indifferent to the public when it comes to access. If a reporter does not cover a particular department regularly, your request for an interview will be sidelined or ignored. And if you represent a publication that does not have the weight of The New York Times or The Wall Street Journal, you will be dismissed.

Friends of mine who work for a charity dealing with a terrible and under-reported disease, Myalgic Encephalomyelitis, have found the gatekeepers not only unhelpful but obstructionist at the Department of Health and Human Services and its agency, the National Institutes of Health.

When I managed reporters in Washington, I urged them to find ingenious ways around the gatekeepers, such as riding back and forth on the subway that carries members from the Capitol to their office buildings. Eventually, you would have a word with a congressman. And, surprise, surprise, he or she would be happy to oblige, unaware of the barriers erected around them by their gatekeepers. I have known senators who would sit in their offices hoping to see a new face, while their staffers turned them away.

Unfortunately, the phenomenon of out-of-control gatekeeping is not confined to the government and Congress. It is now rampant throughout society.

But it is the isolation of government from the people that is damaging and pernicious. It is that which creates and feeds the wrongs of lobbying and establishes the power of the elites.

Officialdom knows that saying “no” has more power than saying “yes.” The gatekeepers, who decide who should be heard and who should be denied, have always been with us. Witness the courts of Europe.

To get around the Washington gatekeepers, here are some extreme measures:

—Get a home address for the person you want to talk to — there are many services that will sell you armfuls of personal information, including home address and telephone numbers.

—Join the person’s church — public piety is in.

You could, I suppose, try sending a drone with a message through the window of the unfortunate one you have been denied access to. But I would not advise that, just yet.