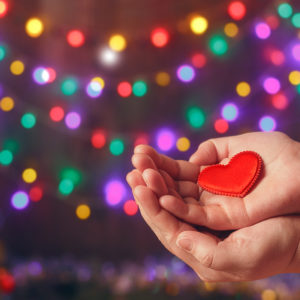 Every year around Christmas time, the offended and indignant among us break into rival camps: one holding firm to the inclusive “Happy Holidays,” and the other clinging to the original, “Merry Christmas.” Charges of a “War Against Christmas” and calls for boycotts will fill the air any day now. Ho. Ho. Ho.

But if we look past the silliness of the vocal minority who can’t help but view everything through partisan glasses, there are some things to learn at this most wonderful time of the year. And some of them actually do have to do with our partisan divide.

But first, some heartening news. Last year on Giving Tuesday, the day after Cyber Monday, Americans donated one-quarter of a billion dollars to charities, the lion’s share of which went to causes assisting the poor. And while we might expect this sort of thing around Christmas, what with the Salvation Army seemingly camped out in every shopping center, it happens that Americans donate a shocking amount of money year-round.

In 2017, Americans gave more than $400 billion to U.S. charities. Corporate philanthropy accounted for only 5 percent of that number; most of the money came from individuals. Contrary to the repeated claim that the rich are selfish, more than 90 percent of high-net-worth households gave to charity. The average rich household gave 10 times what the average U.S. household gave. And the giving didn’t end with money. More than 60 million Americans volunteered around $200 billion worth of their time. In money and time, Americans voluntarily gave away well over a half-trillion dollars last year. That is more than the federal government spent on all welfare programs combined.

Last year, 25 percent of charitable giving went to foundations, and to arts, humanities, cultural, environmental, animal, and public benefit charities. The remaining 75 percent went either directly to the needy through education, human services, and international charities, or indirectly through religious groups.

All this giving was not, however, distributed evenly across America’s ideological spectrum. Three times as many Republicans as Democrats gave more than $5,000 last year, while 80 percent more Democrats than Republicans gave less than $100. And while party is not a perfect proxy for ideology, compared to people who self-describe as “conservative,” self-described “liberals” have average household incomes that are 6 percent higher, yet they gave 25 percent less.

Americans are generous regardless of political orientation, but the differences in voluntary giving point to a difference in how each group views its role in society.