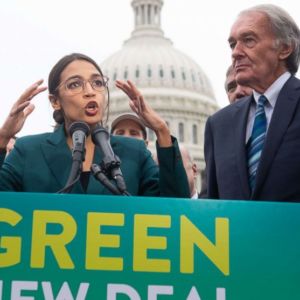 Not since Newt Gingrich, Dick Armey and The Heritage Foundation cooked up the Contract with America in 1994, has there been such a clever piece of political stagecraft as the Green New Deal.

But whereas the Gingrich plan was able to make its way untrammeled through the congressional election and, in many of its goals, into law, the Green New Deal is by its nature more political theater than legislative agenda.

The Green New Deal is a crummy document, featuring many old and failed ideas from the past — stretching back to the 19th century. But as a banner, it is effective; as a call to arms, it works.

What its Republican critics have wrong is that in cleaving to the White House line on global warming, they underestimate the degree of real alarm that aberrant weather, more severe hurricanes, rising sea levels and daily reports of catastrophic ice melts in the Arctic and Antarctic will engender.

A television video of a starving polar bear, whose sea ice habitat is under threat from climate change, has an incalculable effect on public alarm. But that bear and the bad news of rising water in Miami, Norfolk, Va., and San Francisco cannot be denied and will be present at the balloting in 2020.

The Green New Deal document is too broad, too idealistic and too weakly drafted to be taken seriously as legislation. But as propaganda, it is brilliant.

As presented by the Democratic House-Senate duo of Rep. Alexandria Ocasio-Cortez of New York and Sen. Ed Markey of Massachusetts, it is more than an environmental wish list. It is a far-left social and environmental game plan. It is a call to reorder, re-engineer and convert our society from what we drive to what we eat. It delves into the crypt of failed socialist ideas and brings out the cadavers, like the one of a living, guaranteed wage.

Sadly, the Green New Deal will hang some of these old, failed ideas around the necks of many of the Democratic presidential hopefuls — at least five have uncritically endorsed it.

Recently, I went to hear one of those contenders, Rep. Tulsi Gabbard of Hawaii. In a few words, she impressed me; then, in a few more, she appalled me.

As someone who has served two deployments in the Middle East, as an enlisted woman and as an officer, Gabbard has something to say about foreign policy: She says no more wasteful foreign wars. But as an environmental champion, she has swallowed whole the weary fictions of the left.

Gabbard determines all electricity should be generated by renewables, defined as solar and wind. For good measure she throws in a denunciation of nuclear power, concentrating on the abandoned San Onofre plant, between Los Angeles and San Diego. To make her point, she says the waste would last for 500,000 years, which should get a sharp rebuke from scientists.

Nuclear, she should be told, is progressive. It is science at the beginning of its age of discovery with new products and ideas swirling around as they have not since the 1950s. Small, factory-built reactors with various new technologies are being readied for market. The Holy Grail of nuclear fusion is closer than ever.

The science of carbon capture and storage, she should also be told, is evolving.

The green world needs to know that wind and solar are limited in that they cannot produce more power than they reap. Solar is confined by the amount of sun that falls on a given collector, wind by the amount of ambient breeze blowing though one windmill. That is guaranteed by the second law of thermodynamics.

Nonetheless, the message of the framing-word green in the Green New Deal is a clear call to arms. The rest of it should be put down to Ocasio-Cortez’s youth and inexperience and Markey’s foggy hopes.

But that does not mean that the next election will not, to rephrase a Clinton slogan, hinge on “It’s the climate, stupid.” The Green New Deal makes a nifty bumper sticker.