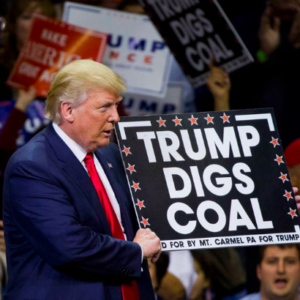 The ‘Green New Deal’ May Not Save Planet Earth, But It Could Rescue the Trump Campaign

The progressive “Green New Deal” may not save planet Earth from the ravages of global warming, but it may rescue Donald Trump’s 2020 re-election campaign.

Whatever his other struggles may be with Russiagate and congressional investigations, Rep. Alexandria Ocasio-Cortez continues to be the gift that keeps on giving for President Trump. Her frequent gaffes and far-Left policy proposals give the counter-punching president exactly what he needs—a foil.  And with every major announced 2020 presidential candidate endorsing her #GreenNewDeal (GND) proposal, it appears the Democratic Party is going to join her in the line of fire.

“We are on an out-of-control roller-coaster going 100 miles per hour, and we have no functioning brake,” one liberal Democratic strategist told National Journal regarding concerns that the party is heading too far left.

Another Democratic activist in the key early state of New Hampshire tells InsideSources: “Right now we’re watching my party confirm every attack from the Republicans that we’re a pushing socialism.  Because this time, it is socialism.”

It’s hard to argue with that description when the first sentence of the GND handout begins, “This is a massive transformation of our society.”

Among other things, the GND resolution calls for policies to:

An end to the entire multi-trillion-dollar carbon energy sector of the U.S. economy and the millions of jobs that go with it;  trillions in new public spending; the end of air travel and private ownership of automobiles as we know it; and guaranteed homes and incomes for all.  In short, the #GreenNewDeal is a complete restructuring of the American economy and a massive expansion of government power far beyond anything seen even in FDR’s original “New Deal” during the darkest days of the Depression.

Rep. Ocasio-Cortez has acknowledged her plan “requires massive government intervention…It does,” she told NPR. “Yeah, I have no problem saying that.” Which is good, because that’s exactly what many progressives have been waiting to hear.

“Of course, big ideas take time to push along,” Rep. Pramila Jayapal (D-WA) told the San Francisco Chronicle.  “We went to space. We finally got rid of slavery. We finally got black folks and women the right to vote. Those things were ‘crazy’ at the time. If providing health care to every American is crazy, call us crazy.”

“Ocasio-Cortez’s Green New Deal represents an earthquake in the Democratic Party and American politics where a working class Latina bartender from the Bronx is now proposing and leading the most serious solution to rewrite America’s social contract and stave off climate disaster,” said Alexandra Rojas, Executive Director of Justice Democrats in a statement.

“Any Democrat running for President who wants to be taken seriously on climate and economic policy needs to back Ocasio-Cortez’s Green New Deal resolution.”

All of which is music to Team Trump’s ears. Axios reporter Jonathan Swan said on Fox News Thursday that “we’ve been talking to Trump’s political advisors, it’s like Christmas and Hanukkah and every other holiday has arrived.  I’ve never seen them so joyful and full of glee. They’re gonna elevate this and talk about it til the cows come home.”  According to Swan, Trump’s team hasn’t been this upbeat about his 2020 prospects since he first took office.

And with good reason.  The contrast between his embrace of pro-growth policies that benefit America’s working class versus the environmental movement, which demands economic sacrifice in the name of a cause most popular among coastal elites, plays right into the Trump narrative.

“I wonder if Democrats who represent middle-class and poverty stricken districts will fight the Green New Deal, as it would be devastating to their constituents,” tweeted Trump campaign manager Brad Parscale.

“The only people who can afford to be environmentalists are billionaires.” says GOP strategist Andy Surabian.

And while liberal billionaires like Mike Bloomberg and Tom Steyer talk nonstop about climate issues, voters rarely rate it their top issue.  In fact, in Gallup’s January 2019 poll, “environment/pollution” was the number one concern of just 3 percent of respondents.

In many ways, the #GreenNewDeal is similar to the New York City congresswoman who is its champion: Very big on social media, a darling of the liberal press and inspires passion in the most progressive wing of American politics.  But under scrutiny, support wanes and uncomfortable questions are raised.

President Trump would love to spend the 2020 campaign talking about those questions, as opposed to the questionable behavior of his own.