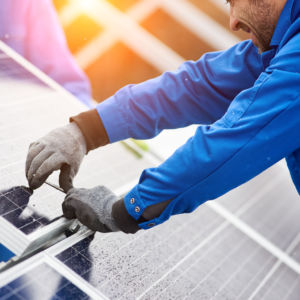 New Green Deal May Die Due to Lack of Skilled Workers

The announcement of the Green New Deal proposal by freshman New York Rep. Alexandria Ocasio-Cortez (D) and Massachusetts Democrat Sen. Ed Markey has sparked a debate over the affordability of this trillion-dollar effort. But even if activists can convince American taxpayers to pick up the tab, there’s another major obstacle to overcome:

There aren’t enough skilled workers to do the job.

The Green New Deal calls for “building or upgrading to energy-efficient, distributed, and ‘smart’ power grids, and working to ensure affordable access to electricity.” Fulfilling this part of the mandate is estimated to cost between $338 billion and $476 billion. It will also require thousands of workers with the technical skills to install solar panels and wiring.

America is already dealing with a prolonged shortage of electricians. Since 2010, the global staffing firm Manpower Group has reported that skilled trades are the hardest positions to fill nationwide. In part, this is an effect of the housing market crash, which saw the construction industry shed 1.5 million workers. A survey conducted by the Association of General Contractors last year found that 60 percent of respondents stated that hiring electricians was more difficult than it had been a year before

This is the result of an education system that has pushed students away from vocational and technical training, even as technological advances continue to drive the need for electrical installation.

Industry groups are increasing their outreach and education efforts in an attempt to encourage young people to enter the field and, hopefully, ameliorate the issue.

“The task ahead is not only to recruit and train more electricians to meet the needs of a growing industry, but to make provisions to replace current electricians who will retire,” said Edwin Hill, president of the International Brotherhood of Electrical Workers to a trade publication.

A massive infrastructure bill like the Green New Deal could end up swamping the broader construction industry by increasing demand for electricians. For workers with the appropriate training, wages would increase. However, a hot hiring market might not bring the sort of job security some workers want.

While Ocasio-Cortez has promoted the Green New Deal by stressing the benefits it will provide workers, unions have been hesitant to support it. In part, this reflects the large union presence in the oil and natural gas industries, which are directly threatened by the proposal.

“The real New Deal put green in working people’s pockets, won massive public support and lifted our nation out of despair. The latter threatens to destroy workers’ livelihoods, increase divisions and inequality, and undermine the very goals it seeks to reach. In short, it is a bad deal,” said Terry O’Sullivan, general president of the Laborers’ International Union of North America (LIUNA), rejecting the attempt to blend climate change and infrastructure legislation.

Other unions fear that the jobs offered by the Green New Deal would be classified as temporary or contract-based positions without benefits or certain labor protections.

“The wages that are being paid by the third party who is installing some of this [renewable] technology is about half of our wages with no benefits and no insurance,” said Donnie Colston, director of the utility department at International Brotherhood of Electrical Worker, to CUE, an organization promoting better relationships between workers and employers.

All of that is bad news for the feasibility of the Green New Deal–and for anyone wanting to build a house or business while the project is underway. America is already struggling to find enough trained workers to wire new buildings. Going green will only make that more difficult.