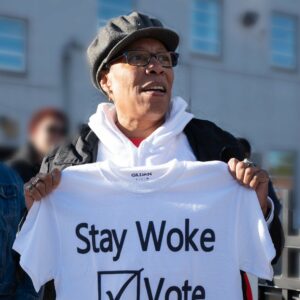 Too “woke” to survive.

During a recent and timely discussion with the VOX Media website, Carville advised readers about the Democrats’ messaging issues, “That’s why I’m doing this interview. Lots of smart people are going to read it, and hopefully, they can figure out that which I can’t. But if you’re asking me, I think it’s because large parts of the country view us as an urban, coastal, arrogant party, and a lot gets passed through that filter. That’s a real thing. I don’t give a damn what anyone thinks about it — it’s a real phenomenon, and it’s damaging to the party brand.”

Some of that damage is the residue of “woke” folks’ defunding the police mantra.

Do you really want to defund the police after what we witnessed in New York recently? Three bystanders were shot in Times Square, including a 4-year-old; three were shot in a mall near Miami; four were killed and one injured in a Baltimore townhouse.

Nowadays, it seems mass shootings come with our television sets, as they are so often in the news.

According to The New York Times, 463 people have been shot in that city this year, an increase from 239 during the same period in 2019 and up from 259 last year.

Carville added, “Wokeness is a problem and everyone knows it. It’s hard to talk to anybody today — and I talk to lots of people in the Democratic Party — who doesn’t say this. But they don’t want to say it out loud.”

“Because they’ll get clobbered or canceled.”

Who sets the rules in the “woke” game anyway? And who determines who loses his/her job for making controversial comments vocally or on social media?

Is it Black Lives Matter?

Or perhaps LeBron James of the NBA is the world’s top arbitrator of “wokeness.”

Remember, he spearheaded the rebellion last year against Drew Brees when the former New Orleans Saints quarterback publicly stated he believed NFL players kneeling during the national anthem was disrespectful to the military.

What about that maddening crowd on Twitter? If enough social media groupies clamor for someone’s head, we often see immediate results.

Or maybe the real arbiter of “wokeness” is Benjamin Crump, the ubiquitous attorney who traverses the country representing families of seemingly every Black dude killed by police.

Carville may prove prophetic ahead of next year’s midterm elections, to be held with Democrats in slim control of the House of Representatives and Senate.

But for how long?

Dr. Arthur Cyr, professor of political economy at Carthage College in Kenosha, Wis., explained today’s political atmosphere this way to InsideSources: “Joe Biden essentially is pragmatic and interested in sensible policy, in my opinion. That means working effectively with Congress, whereas Carville points out a far-left agenda ultimately will boomerang.”

A “boomerang” effect that ultimately could mean the Democrats lose both houses in 2022. Add that to the possibility that Donald Trump could re-emerge in 2024 while traveling via an anti-wokeness campaign train.

Again, voters, observers, and analysts cannot discount a guy who garnered nearly 75 million votes, which would have won any other election in U.S. history . . . except for 2020 (and despite Trump’s bungling of the pandemic, which is astonishing).

Note that White House Chief of Staff Ron Klain told correspondent Mike Allen on “Axios on HBO” that he “wouldn’t want to estimate or underestimate Donald Trump as an opponent if he chooses to run . . .”

Also, this morsel may be revelatory: 76 percent of respondents agreed with Carville about the dangers of “wokeness” for Democrats. That figure was the result of a flash poll taken by CNN following an interview of Carville recently by the cable network.

Carville also told VOX, “Here’s the deal: No matter how you look at the map, the only way Democrats can hold power is to build on their coalition, and that will have to include more rural white voters from across the country. Democrats are never going to win a majority of these voters; that’s the reality. But the difference between getting beat 80 to 20 and 72 to 28 is all the difference in the world.”

If “wokeness” is found to be a strong force in persuading many to vote Republican instead in upcoming elections, Biden’s final half of his first term could be mostly ineffective.

Yes, “wokeness” could be at the center of a high-stakes game of Powerball — political style.