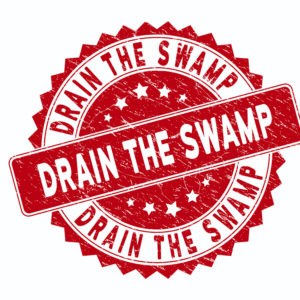 The Keening of the Swamp Beast

Elections are supposed to determine policies, otherwise why bother with elections?

But an odd feature of American politics enables an outgoing president to extend his political power beyond his term of office via the appointment of “midnight judges”  … and via the issuing of midnight regulations.

The first refers to the practice dating back to the country’s founding of soon-to-be ex-presidents making political appointments right up to the final moments of their presidency, often as payoff to supporters.

The famous Supreme Court case Marbury v. Madison ruled this practice legitimate and established the doctrine of judicial review, the authority of the Supreme Court to judge the constitutionality of laws passed by Congress as well actions of the executive.

But the second practice — the issuing of last-minute regulations by a lame-duck president — hasn’t been ruled constitutional and is more insidious because instead of paying off a man, it empowers a bureaucracy.

One that voters have no power to vote out of office.

Outgoing President Barack Obama spent the final months of his presidency doing his utmost to perpetuate his presidency’s policy goals by issuing one new midnight regulation after another — all of them designed to thwart the incoming president’s policies.

And thereby, arguably, thwart the expressed will of the voters.

One example being the last-minute edict that would have nearly doubled federal fuel economy mandatory minimums, raising them from the current 36 mpg to almost 50 mpg by the 2025 model year. President Trump’s policy in this regard is that it ought to be up to the people who buy new cars to decide how much they want to spend in order to “save” on gas, not for the federal government to decree it (and force people to pay for it).

In a huge pre-impeachment kerfuffle, the president used his pen to rescind Obama’s midnight mpg regulation, inciting keens of outrage from the wounded Swamp Beast.

The president now has another opportunity to strike a blow against the Beast — the permanent bureaucracy that resents elections when their outcome runs contrary to its intentions — by rescinding the Obama-conferred last-minute power of the Department of Labor, via something called the Office of Federal Contract Compliance, to smear private companies that do business with the government as “racist” and practitioners of “discrimination” based on statistical analysis.

In other words, on equality of outcomes — bean counting based on sex, race, age and so on. If every black woman isn’t earning exactly the same salary (and benefits) as every white man, then it’s ipso facto because the woman is being “discriminated” against. Other variables aren’t event considered. Outcomes are the only consideration.

This vile doctrine was rejected by the voters in 2016, but it lingers into 2020. The Department of Labor bureaucracy has even gone to the extreme of suing a number of tech contractors that have been doing business with the government for years, including Oracle, Palantir and Google. All have been accused of oppressing anyone who isn’t a straight white male.

Not a shred of evidence in support of such outrageous assertions has been presented, and this business of using statistical analysis rather than actual evidence of discrimination is considered without legal foundation.

But it has political support among the holdovers from the Obama years embedded within the Labor bureaucracy who insist upon equality of outcomes.

Oracle, Palantir and Google have been forced to spend millions defending themselves against Labor’s legal harassment, all of it empowered by the dead hand of an administration that hasn’t been in office for going on four years now.

But it wasn’t just the dead hand of the Obama regime that enabled all of this. The man Trump appointed as his first secretary of labor — Alex Acosta — declined to annoy the Swamp Beast, apparently because of his political aspirations. The Washington Post reports that Acosta was “not a good fit” with the Trump administration, who “aspired to be a federal judge” and “had a strategy to play it safe” by not annoying House Democrats, whose votes he’d need to be confirmed as a judge.

The Post story says Acosta ran “an inside game” at the Department of Labor, where he sought to keep “union leaders and Democrats on Capitol Hill” from lining up against him in the future by not opposing the Obama-era regs in the present.

Acosta was forced to resign, but not because he ran point for the Beast. Rather, because he enabled an even worse beast: Jeffrey Epstein. As a U.S. attorney for Southern Florida, he approved a sweetheart plea for the notorious pederast back in 2008 that allowed him to escape federal prosecution as well as serious prison time.

When the latest Epstein scandal came to light, so did Acosta’s role in the earlier one, and that put the kibosh on his continued tenure as a Trump administration official.

If any good can come of the Epstein mess, it is that Acosta is no longer there to protect the other beast.

His replacement as Labor Secretary is Eugene Scalia, son of the late Supreme Court Associate Justice Antonin Scalia. He has the opportunity to do what his predecessor didn’t — and what the voters elected his boss to do.