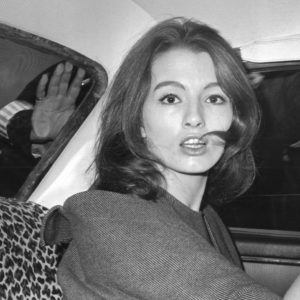 FILE - in this file photo dated July 22, 1963 Christine Keeler, a principal witnesses in the vice charges case against osteopath Dr. Stephen Ward. The model at centre of Profumo Affair, a scandal that rocked the political establishment and forced cabinet minister to resign, has died Tuesday Dec. 5, 2017, according to a statement issued by her family. (AP Photo/FILE)
[IS] Opinions

The Sex Scandal of the Last Century

The key player in one of the greatest sex scandals, Christine Keeler, died Dec. 4.

When it comes to sex scandals, nothing that has been revealed lately has anything on Britain’s Profumo Scandal of the early 1960s. The cast was incredible: two nubile and very sexy young women, Christine Keeler and Mandy Rice-Davies; a society osteopath, Dr. Stephen Ward, who organized sex parties for men at the top, including minister of war John Profumo; a KGB officer at the Soviet Embassy, Yevgeny Ivanov; and Lord Astor, a leading aristocrat.

The unraveling: Christine’s two earlier lovers got into a fight and shots were fired outside of Ward’s home. Britain’s libel laws were very strict, and the extent of the sex scandal did not break in the newspapers until the rumors were published in the United States. The security services had already warned Profumo that he was sharing Christine with a Soviet spy, and he ended his affair with her.

The unforgivable factor: Profumo lied to the House of Commons and weeks later had to resign. He left the scene for social work in the East End of London, which he did for the rest of his life.

I met Christine and Mandy at the offices of The Sunday Mirror in 1963. My opinion: Christine was one of the most beautiful and intriguing women I have ever laid eyes on. She had a mystical quality, a Mona Lisa.

Mandy was less attractive, but bubbly and exuded fun. She was a good time-girl, who liked parties and sex, by her own admission.

Christine averred these were her interests, too. But she was more: a beautiful, tragic child. She was just 19 and hoped to be model.

When it all came tumbling down, Ward was convicted of living off immoral earnings and committed suicide. Mandy married three times, lived in Israel and the United States, and was involved in the London theater. Christine began a huge and tragic slide that two marriages and two children failed to arrest. When she died, she was living in public housing; fat and raddled, all traces of her daunting beauty gone.

Lord Astor left England for the United States while the scandal cooled.

I always wished that Christine would have thrown her head of dark hair back and said, “I did it and I loved it.” Mandy more or less did.

Scandals don’t have happy endings, laced as they are with hypocrisy and betrayal. Everyone betrayed everyone in the Profumo Scandal. Christine was the most betrayed.

The bitcoin fever — along with all of the other cryptocurrencies that blockchain technology has made possible — has one interesting consequence: a huge new demand for electricity.

But the electric bonanza won’t benefit all the electric utilities: The server farms follow the lowest cost for power. Therefore, electric companies with very cheap power, as those in the Northwest with hydropower, are the winners. But all the winners aren’t domestic: Some are likely to be overseas, and Iceland is a strong candidate to host the next rash of server farms.

Environmentalists are calling this a disaster. If cryptocurrency growth continues at its present wild speed, more electricity is likely to be generated with coal, especially outside of the United States.

It is the great growth area for electricity. While natural gas is becoming dominant in the United States, poor countries that want to jump on the high-tech bandwagon, like Poland, could be burning vast quantities of coal.

See it as the real-life consequences of something that only exists in cyberspace, a ghost materializing. The winner may be Iceland with mega hydro available.