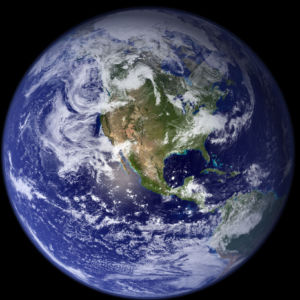 For most Americans, today’s annual ritual of Earth Day is an uncontroversial one.

It’s a chance to celebrate the beauty of nature and, for those truly committed, reflect on ways to better preserve the environment, protecting the only planet we’ve got.

Yet every time April 22 rolls around, the tradition draws skepticism and even outright opposition from a vocal minority on the political right. They see a holiday hostile to humanity, prioritizing fringe environmental concerns over the very existence of mankind. In conservative media, this is cause to condemn the United States green movement for its most radical roots, dating back to the first Earth Day in 1970.

“Earth Day isn’t really about picking [up] trash in your local park or remembering to recycle your soda can. It isn’t even about hugging a tree,” Glenn Beck’s website declared on Monday. “Earth Day is a yearly reminder that humanity must be controlled, manipulated and even destroyed for the good of the planet.”

Beck has been running “radio serials” making the case against Earth Day all week, and they’ve echoed conservative outlets from National Review to the Weekly Standard and the Washington Times, all of whom have been critical in the past. Many of their objections stem from two books that laid the groundwork for the holiday and the modern environmental movement in general: Rachel Carson’s 1962 “Silent Spring” and Paul Ehrlich’s 1968 “Population Bomb.”

Critics blame Carson’s text about the dangers of pesticides, specifically DDT, for the death of millions in the developing world after the chemical ceased to be used in the fight against malaria. However, defenders point out that Carson never advocated banning pesticides and DDT was on the decline before her book arrived. She continues to be revered as a green icon of unparalleled influence.

The rap against Ehrlich, who spoke at the first Earth Day, was explained by the environmentalist magazine Grist in 2006. The author “proposed limits on population, including economic sanctions and forced sterilization. Against the backdrop of the civil rights and Black Power movements, Ehrlich’s arguments read like a modern-day version of the eugenics and scientific racism.”

Slate had more on this in 2008, exploring the author’s “fantasy of redemption through annihilation, imagining that potential die-offs or dramatic mass sterilizations would be necessary for a more balanced environment. For the United States, he proposed the creation of a Department of Population and Environment to regulate procreation.” Even for many concerned about overpopulation, these ideas have seemed extreme.

Another reason Ehrlich is featured in conservative media every Earth Day is that many predictions he made never came to pass. Reason Magazine flagged several of these, including his belief that “between 1980 and 1989, some 4 billion people, including 65 million Americans, would perish” due to overpopulation.

None of this disputes the real environmental concerns of 2016, but it’s used to cast doubt on dire predictions from the green movement, including on climate change.

Nevertheless, conservatives also are prone to negative media hype about Earth Day, including that it was founded by a convicted murderer who killed and “composed” his girlfriend.

Philadelphia Magazine has the bizarre account of Ira Einhorn, who indeed claimed to have started the tradition, but the publication concluded that his role has been greatly exaggerated.