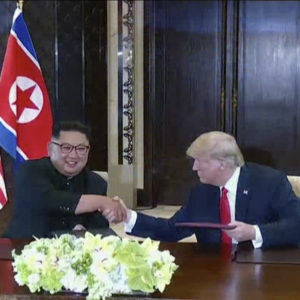 Because President Donald Trump was a reality TV star, he is oriented toward winning each day’s news cycle, or at least deflecting any bad news of the day via distraction. Given that his governing style depends on such day trading, he basked in the ultimate high of startling the world with his unlikely summit with North Korean leader Kim Jong-un in Singapore last June. There he signed a vague summit agreement with Kim and then later tweeted that “there is no longer a Nuclear Threat from North Korea.”

Yet since then, things have not gone well in U.S.-North Korea negotiations to make the North Korean nuclear and missile threats evaporate, as Trump promised. Kim pocketed the international legitimacy that the leader of the Free World gave the dictator of a small, rogue state and has not even provided a list of his nuclear weapons, missiles and facilities, let alone getting rid of them. In fact, unsurprisingly, a U.S. think tank has recently cataloged 13 of 20 undeclared North Korean missile sites.

The first jolting reality is that the supposedly kooky and irrational Kim has used the need of Trump’s monstrous ego for pomp and circumstance to play the inexperienced U.S. president. The second harsh actuality is that the North Koreans saw the United States overthrow Saddam Hussein of Iraq and Moammar Gadhafi of Libya after they gave up their nuclear programs and are thus reluctant to experience the same fate.

Because no viable U.S. military option exists to take out all of North Korea’s missiles, small nuclear weapons stockpile and related facilities, the United States will eventually need to use its vastly superior atomic arsenal to deter any attack from a nuclear North Korea — as it has successfully done in the past with more formidable nuclear foes such as those of China and the Soviet Union (and its successor state Russia).

Yet the fear of U.S. military planners is not really that the North Korean autocrat will ever attack the United States with nuclear weapons — a suicidal mission given the vast dominance of the U.S. nuclear arsenal compared to the small number of nuclear weapons and long-range missiles in possession of “Dear Leader.”

Even now, doubt exists among some analysts about the North’s capability to launch a long-range missile containing a nuclear warhead, have it survive re-entry into the Earth’s atmosphere, and accurately hit a target in the United States. Their real apprehension is less with American security and more with the preservation of the informal U.S. Empire in the Asia/Pacific region.

The reasoning among military planners and nuclear analysts is that if North Korea even had some possibility of hitting the United States with a long-range nuclear-tipped missile, it could attack, invade, harass or intimidate South Korea or Japan and then threaten the United States with nuclear retaliation if it came to the aid of either of its allies militarily.

The solution to this problem and the remedy to the valid perennial irritant on which Trump has shined a spotlight — the U.S. subsidizing the defense of now wealthy allies and getting little in return in terms of economic benefits, such as the full opening of their markets — is to ween Japan and South Korea off U.S. military protection, thus spurring them both to spend more money on defense.

And if that required them developing and deploying nuclear weapons to deter North Korea or other potential regional adversaries, Trump’s suggestion that such a course would not be objectionable might be acceptable. After all, Japan and South Korea are not Iran and have been responsible actors on the international stage for decades now. Nuclear proliferation to unstable or rogue states is one thing and to stable, lawful nations is an entirely different matter.

Much of the problem with U.S.-North Korea relations lies with the continued American military tutelage of South Korea and Japan. The United States now has almost $22 trillion in national debt and can no longer afford such a dangerous, forward-based and overextended military posture in East Asia.

On the 100th anniversary of the end of the horrific World War I, Americans should remember that alliances should be temporary means to a nation’s security and are not ends in themselves. In the early 20th Century, none of the great powers in Europe wanted a general war on the continent, but their entangling alliances dragged them into what would become a brutal meat grinder. Also, America’s founding generation cautioned about “permanent” and “entangling” alliances, but modern-day politicians have forgotten their warnings. The anniversary of World War I is a great time to jog their memories.