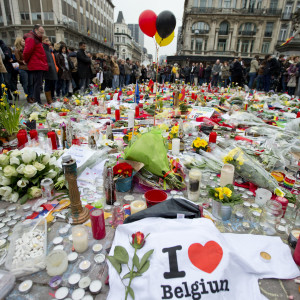 Three balloons in the colors of the Belgian flag fly as people mourn for the victims of the bombings at the Place de la Bourse in the center of Brussels, Belgium, Thursday, March 24, 2016. The Islamic State group has trained at least 400 fighters to target Europe in deadly waves of attacks, deploying interlocking terror cells like the ones that struck Brussels and Paris with orders to choose the time, place and method for maximum carnage. (AP Photo/Peter Dejong)
[IS] Opinions

The Myth of Immigrant Assimilation

In the aftermath of the Brussels attacks, critics are blaming Belgium for not assimilating immigrants from the Middle East and North Africa.

The fact is that Europe does not do assimilation. Europeans widely practice what might be called “anti-assimilation.” Instead of engagement with their immigrants, they practice a kind of look-the-other-way stance.

Muslim immigrants on the whole do not seek to integrate into European societies, but rather to demand that European societies adopt their ways. In Belgium, which has three official languages — Dutch, French and German — there are constant demands that Arabic become a fourth. Muslims in Britain, and throughout Europe, demand shari’a, or Islamic law, for their communities. Muslims in Europe, and the United States, demand that Eid al-Adha (Feast of the Sacrifice) be accorded the same recognition as a public holiday as Christmas.

Muslim defenders, after the bombings in Brussels, insist that Western countries with large Muslim minorities should do more to integrate them into national life. But this integration mostly means that the host culture should bow to the insurgent one.

In ancient lands, like Britain and France, this is an affront; as though the extraordinary traditions of those countries should be shoved aside to accommodate the cultural demands of an a very antagonistic minority. That is asking too much.

Europe has mostly dealt with the challenge by hoping that new generations born in Europe and subjected to the influence of European education, the arts and media will become little Europeans: little Frenchmen, little Belgians, little Englishmen, versed in European history and imbued with European values. There are such people throughout Europe, from those of Turkish descent in Germany to Indians in Britain to North Africans in France.

But by and large the Muslim minorities remain separate, unequal and belligerently hostile to the countries that have given them shelter and opportunity. Rather than the generations born in Europe adopting European norms, they have ended in an unfortunate place where they are outcasts by their own inclinations and by the difficulties posed by European societies, which are quietly nationalistic, closed, eyes-averted.

If anything, the separation has grown worse for generations that know no life other than the one they lead in Europe. This is often marginal, lived in ghettos like the banlieues, the suburbs to the north of Paris, the troubled Brussels neighborhood of Molenbeek, or Bradford in the north of England.

The original immigrants could look back to what they had escaped, whether it was war and persecution in Algeria, in the case of those who migrated to France, or the grinding poverty that prevailed in Pakistan, in the British case. People move for safety or for a better life. They do not move because they want a new food or a new religion: They want the old food and the old religion in a better place.

Trouble is, three or four generations on, the migrant descendants may not feel they are in a better place. They are isolated, largely unemployed and subjected to the preaching of murderous extremists.

Once in Brussels, my wife and I were walking down a side street not far from the Grand Place. My wife, who lived in the Middle East and speaks Arabic, remarked that we had left Europe within a few streets and entered North Africa.

As we passed some young men, standing outside a cafe, she heard one say to another in Arabic, “What are they doing here? They don’t belong here.”

When the London suburb of Brixton was becoming a black enclave, favored by West Indian immigrants, I lived nearby. “Don’t go there. Maybe they will leave one day,” my neighbors said when I wanted to go there.

No-go areas are not always that: they also are not-want-to-go areas. Someone has to want assimilation, if that is the answer.