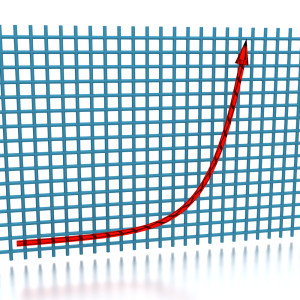 Recently, when I clicked on a link from Flipboard titled “8 Exponential Trends That Will Shape Humanity,” a slide deck from a marketing firm called sparks & honey informed me that, “Our blind spot comes from the fact that we have lived in a linear world. But today’s changes are exponential.” What do you expect from marketing firms? They are not known for their intellectual restraint. But unfortunately “techno-exponentialism” has gone viral, with this claim being made at every third TED talk, on the pages of mainstream publications and even on web sites of leading companies. There’s only one problem: the rate of change is not speeding up, certainly not exponentially.

It used to be if you wanted to demonstrate that you “got it”—Silicon Valley-speak for intellectually hip—you’d say something like:

Large scale corporations can’t produce value anymore. We need pull-based systems as technology loosens things up. This must be backed by scalable learning underpinned by new architectures. Indeed, there’s a friction to preserve old theories of control to exacerbate old forms of production. We need to completely reinvent corporations to honor pull-based learning and talent. But we are finding more classical forms that are harder to morph because they are based on loosely coupled process networks.

I kid you not that a leading Silicon Valley guru— you know you are a guru when people refer to you by your initials—said this at recent invitation-only roundtable on the future of the Internet. God only knows what it means, but a bit like the Emperor Has No Clothes everyone nodded as if to say “wow, what a profound insight.”

But today if you want to really show that you “get it” you have to write within the first two paragraphs of your blog or say in the first couple of minutes of your TED talk that “change is not just accelerating, its accelerating exponentially.” John Kotter writes in Forbes that the rate of change is “not just going up. It’s increasingly going up not just in a linear slant, but almost exponentially.” At least he qualifies this with “almost.” Compared to the rest of the techno-exponentialists this puts him squarely in the techno-pessimist camp.

Peter Diamandis and Steve Kotler write in Abundance, that we are entering into an era in which the pace of innovation is growing exponentially. In The Second Machine Age MIT professors Erik Brynjolfsson and Andrew McAfee tout that “technical progress is improving exponentially.” As does Ray Kurzweil, who writes that “an analysis of the history of technology shows that technological change is exponential, contrary to the common-sense ‘intuitive linear’ view. So we won’t experience 100 years of progress in the 21st century — it will be more like 20,000 years of progress (at today’s rate).”

But if you really want to go for the mother lode of techno-exponentialism just check out any major speakers’ bureau and you’ll find exponential growth in exponentialism. On A-speakers.com Jack Uldrich explores exponential trends in technology; Daniel Burrus reminds us “that we’re in a world of exponential transformational change;” Eduardo Braun analyzes the “technology revolution and its exponential nature;” Joseph Jaffe talks about “explosive and exponential” advances and Josh Linker explores “exponential complexity.”

This view is so widely repeated that almost no one recognizes its absurdity. If innovation is improving exponentially every few years, this would suggest that a decade from now, the U.S. Patent and Trademark Office (PTO) should be issuing 4.4 million patents a year up from the 542,000 in 2013 (the exponential rate of increase). Anyone care to wager that there is no way PTO will issue that many patents? Likewise, exponential innovation would mean that economic growth rates should be increasing exponentially. In fact, The Conference Board’s global total factor productivity measure, which assesses the productivity of both labor and capital, actually declined in 2013. The Board writes “This stalling appears to be the result of … stagnating innovation.” What the heck? Clearly the Conference Board doesn’t get it.

So why is everyone on the exponential bandwagon? One word, and it’s not plastics. Smartphones. Everyone is blown away—rightly to be sure—with how much better cell phones are today than before the iPhone hit the market. This was possible largely because of Moore’s Law, the prediction Intel cofounder Gordon Moore made in 1965 that the number of transistors on a chip would double every 12 to 18 months.

However, there are two problems with extrapolating this exponential trend into an iron law of techno-exponentialism. First, despite the importance of semiconductor and related technologies, much of the economy is still based on atoms, not bits. There’s no sign of Moore’s Law emerging in food production, hair cut production or even blog production. Second, it’s not clear that Moore’s Law will continue to hold. Possibly as soon as 2020, the dominant silicon-based CMOS semiconductor architecture will likely hit physical limits (particularly pertaining to heat dissipation) that threaten to compromise Moore’s law unless a leap can be made to radically new chip architectures.

In short, let’s all take a deep breath and say “Change is happening…. like it has for the last 250 years.”