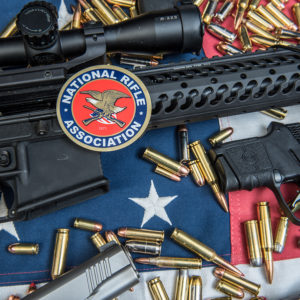 The NRA and the Coronavirus

WASHINGTON — Here’s an oddity about the American response to the coronavirus crisis that foreigners will find difficult to understand.

In most of the United States, factories, shops, theaters, restaurants, schools and much else are shut down. In the nation’s capital, and in the neighboring states of Maryland and Virginia, essential places like pharmacies, grocery stores and eateries selling stuff “to go” — no sitting — remain open.

So guess what else is deemed “essential”? If you would believe it, gun shops.

That’s right, no joke, no kidding. The omnipotent National Rifle Association and other gun-rights advocates have convinced President Trump and his people that the ability to purchase a rifle, a pistol and the ammunition needed to blast away enemies and animals alike is absolutely necessary for the good of the country and its citizens.

It’s not at all clear to me what these people think is so essential about weapons and ammunition in the midst of a global pandemic that is afflicting the United States more than most other countries and is likely to get worse before it gets better.

It will never be possible to kill off the coronavirus by shooting at it. A rifle or a pistol will do no good for self-defense against the bug.

So how is it that ever more weapons are vital when you consider that nearly 400 million of them are already in the hands of the American public, a number that absolutely dwarfs the 4.5 million floating around the American armed forces?

The best answer that I can get, once we’ve gotten past the mumbo-jumbo of the constitutional right of every U.S. citizen to bear arms, is that millions of Americans think they will need to defend themselves against angry citizens who might otherwise try to rob them of food and shelter.

No, there’s been no sign yet of a popular uprising, no indication that hungry people are about to attack anyone in the quest for food, but you never know.

Anyway, the people who sell weapons would definitely like their customers to think they need to be armed for self-defense — an argument strangely similar to North Korea’s insistence on producing nuclear weapons for self-defense against its enemies, notably the United States.

But self-defense may not be the only reason millions of God-fearing Americans feel they need weapons. If the food runs out, if the stores have no more, if people are really facing the worst pangs of hunger, say gun enthusiasts, a weapon might come in handy for hunting down wildlife ripe for slaughter.

Does not every American have the right to be able to shoot a deer or a bear or a pheasant or a duck or any kind of varmint in order to stave off starvation?

If these arguments seem more than a little absurd to foreign readers, they are articles of faith for a large part of the American public.

If Trump is going to win re-election as president in November, he’s got to have the support of a vast conservative if not rightist electorate that’s not going to be influenced by all the anti-Trump rhetoric that sloshes around daily on the editorial pages of The Washington Post and The New York Times. Very few Trumpkins seriously read the Post or Times columns.

On a much higher order of magnitude, though, the United States does have reason to worry about the need for weapons. While the coronavirus rages, the entire U.S. military establishment is under siege. Soldiers, sailors, Marines and airmen are told not to report for duty, not to stage exercises, not to engage in routine training for fear the virus will rapidly spread among them.

For proof of the point, look what happened to the crew of the aircraft carrier Theodore Roosevelt after calling at the central Vietnamese port city of Danang. More than 100 sailors among the 4,000 on the crew have come down with the virus, and the captain has told his bosses in the Pentagon the ship should suspend its mission in the western Pacific until everyone’s sure the bug is gone.

The danger of the virus compromising U.S. defenses around the world is obvious.

It’s a lot easier to understand the concerns of military commanders than the demands of gun nuts for more and better arms to fend off imaginary ghosts that are really only a pretext for gun manufacturers to exploit the menace of COVID-19 for their own private profits.