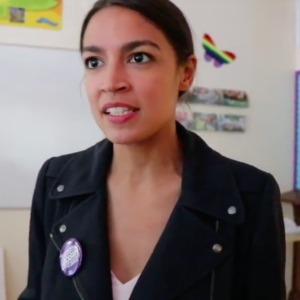 The Ocasio-Cortez Plan to Pay For Progressive Programs? Print (A Lot) More Money

Add it all together and it’s around $4 trillion in new spending per year. That’s nearly equal to the entire federal budget, which is already running a deficit approaching $1 trillion. Double our spending and you could easily wind up with $5 trillion in deficits. How to pay for all that debt?

You don’t. You just print more money and let the debt ride.

That’s the thinking of advocates of Modern Monetary Theory (MMT), an economic approach embraced by Rep. Ocasio-Cortez and a growing group of American progressives.

“The government can afford to pay for any program it wants. It doesn’t have to raise taxes. The national debt is nothing to fear.” So says Stephanie Kelton, Professor of Public Policy and Economics at Stony Brook University and a former adviser to Bernie Sanders.

Josh Barro, writing about MMT for the left-leaning New York magazine describes it this way:

In an interview with CNN, Kelton described MMT in action:

“Suppose the government spends $100 into the economy but only taxes $90 back out. The result is a surplus equal to $10 that shows up somewhere in the non-government part of the economy. In other words, the government’s ‘red ink’ becomes our ‘black ink.’ Their deficits are our financial surpluses.”

“What should scare Americans is allowing misunderstandings and fear-mongering about the national debt to prevent us from taking bold action to deal with the urgent threat of climate change.”

To a layman, this approach— money the government borrows and spends that the taxpayer doesn’t pay back is a surplus, not a debt—sounds like a Ponzi scheme. If debt is really surplus, why not borrow $10 trillion, $20 trillion, or more every year?

The answer from MMT theorists is “Why not?”  They measure the economy by the metrics of full employment and inflation. To get there, the Fed should set interest rates at zero, borrow and spend until we reach full employment, and only stop the stimulus when inflation starts to spike. And when it does, rather than the monetary policy of reducing the money supply, MMT says to raise taxes massively to reduce demand in the economy.

If this sounds dubious to you, you’re not alone. MMT may be popular among Bernie Sanders-style progressives like Ocasio-Cortez and Occupy Wall Street leader Jesse Myerson (whose Twitter bio featured the phrase #FullCommunism), but it’s not a widely-held belief among actual economists.

“MMT is kind of a fringe group. It’s not a mainstream theory,” says Scott Sumner is the Ralph G. Hawtrey Chair of Monetary Policy at the Mercatus Center at George Mason University.

“Should you worry about adding another two or three trillion dollars a year in deficit spending? Well, yeah, I would say so,” Sumner told InsideSources.  “First of all, Rep. Ocasio-Cortez says we can do that without massive, broad-based taxes, which I think is pretty far-fetched. You could probably do it for a few years without the sky falling because the US government has an amazing ability to borrow money. But to me, common sense suggests it won’t work in the long run.”

“When Rep. Ocasio-Cortez invokes ‘modern monetary theory’ to claim that there is no budget constraint on the federal government, she has fallen prey to an illusion. Yes, the government can resort to the printing press to ‘solve’ its budget problems, but inflation still transfers real resources from every other dollar holder to the government. Printing dollars doesn’t create real wealth.”

The fundamental question MMT raises is the impact of inflation. The traditional view is that the more money poured into an economy, the less valuable each dollar becomes (supply and demand). MMT largely rejects this view, believing that the increase in the cash supply will stimulate its own demand. If it doesn’t, the government–not the Fed– should intervene by raising taxes to reduce demand and control inflation.

It’s a controversial theory, to say the least. “MMT adherents are correct that the government can pay for whatever it wants via the government simply issuing debt, which the Fed would then purchase. But they are correct only in a technical sense. What matters isn’t the dollars, but the purchasing power of those dollars. As the Fed purchases government debt, it increases the money supply and so creates inflation,” say Antony Davies, associate professor of economics at Duquesne University.

“When pressed, MMT adherents will claim that the inflation effects will be negligible, in part because the US dollar is a reserve currency. That argument boils down to ‘the inflation effects will be less in the US because they will bleed over to other countries that hold US dollars.’ In short, MMT is a scheme to steal purchasing power from foreigners and from US taxpayers to pay for government spending.”

Modern Monetary Theory may not be mainstream, but it’s a serious economic theory studied by students of monetary policy. Even people like Professor Sumner who reject it say it offers an interesting prism through which to view our economy and question fundamental assumptions.

But MMT’s greatest political utility is as an easy answer for tough questions about how progressives plan to pay for multi-trillion-dollar government programs.—something Rep. Ocasio-Cortez has notoriously struggled with in the past.  Will American voters find this fringe theory an acceptable answer?