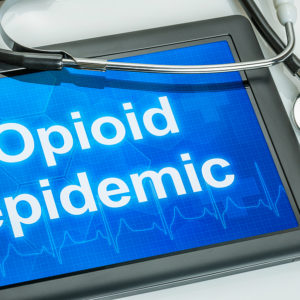 The Opioid Epidemic Stopped Getting Worse on Inauguration Day

Posted to Politics September 01, 2020 by Casey B. Mulligan

From 2000 to 2016, the percentage of Americans dying of drug overdoses quadrupled, increasing essentially every year.

Now some in the media want to say that the increases continued after President Trump took office. Although more policy changes are needed, the progress on slowing the epidemic since January 2017 is obvious and important.

Since the 1990s, an opioid epidemic raged in middle America and was ignored in Washington. The Federal Register (the daily publication of U.S. government agencies), reveals the federal priorities at the time.

As shown in the Congressional Record, more than a decade into the epidemic the Congress was still talking about climate change 27 times as often as opioids. The annual “Economic Report of the President” dates to 1947, but never mentioned opioids or heroin (an illegal opioid) until 2018, which was President Trump’s first report.

President Obama’s primary policy legacy, the Affordable Care Act, unwittingly included first-time Medicare subsidies to opioid-abuse lifestyles (benzodiazepines or “benzos”) and after almost 10,000 Americans annually were turning up dead with both opioids and benzos in their systems.

His administration also decided in 2013 to “end the war on drugs” by ending federal prosecution of nonviolent drug crimes.

As described in the book “Dreamland: The True Tale of America’s Opiate Epidemic,” a new heroin business model subsequently involved dealers who were “never violent. They never carry guns. They work hard at blending in.”

Within months, the deadliest and cheapest opioid fentanyl would become a fixture in illegal drug markets, where the casualties would now be among the customers.

Trump’s Commission on Combating Drug Addiction and the Opioid Crisis concluded in 2017 —  as Indiana Gov. Mike Pence had done two years earlier — that the federal government itself had long been creating financial incentives for over-prescribing opioids. Trump instructed his agencies to stop such practices, which they (reluctantly) did. 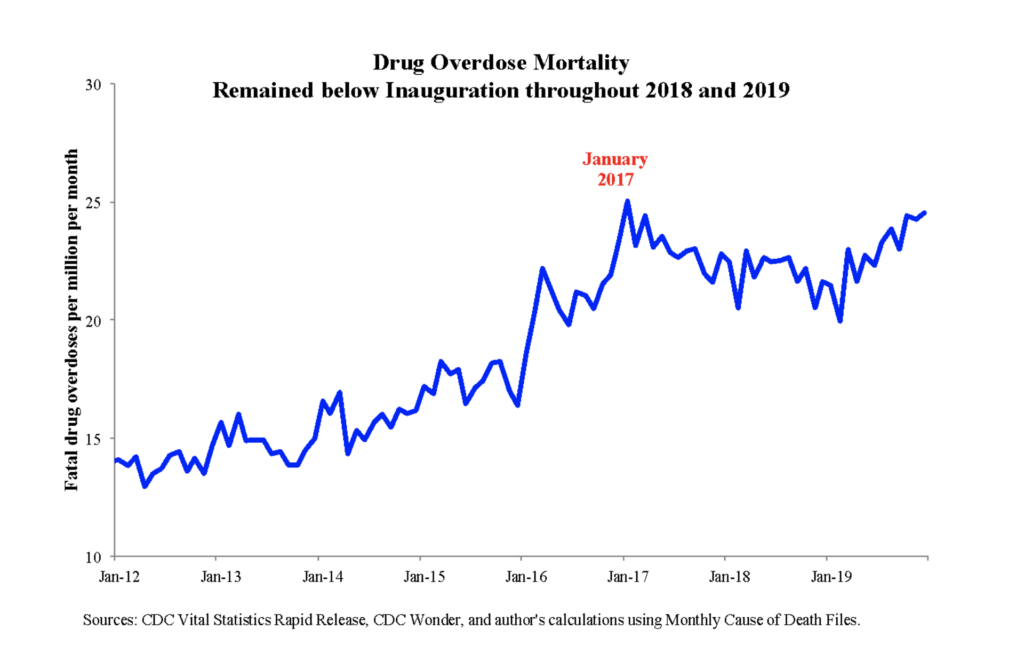 Through the end of 2019, every month had a death rate that was lower than it was when Trump was inaugurated (I expect 2020 to be different due to the effects of the pandemic on opioid supply and demand).

Although the monthly data is noisy and more research is needed to fully understand the causes of the epidemic, it is clear that something changed in 2017 to end the perennial growth in mortality from drug overdose.

More could have been done, beginning with a thorough assessment of what the federal government has done to fuel the epidemic. The ACA, or at least its section requiring subsidies for the opioid-abuse lifestyle, could have been repealed.

Trump’s Food and Drug Administration could recognize the effects of its prescription regulations on the illegal markets that are increasingly the source of fatal overdoses, but the agency refuses to do so.

The Department of Health and Human Services should stop promising the public that making naloxone — a drug that can reverse overdose — more available will help reduce the monthly death rate from overdoses, because often it does not.

But the president’s opponents could do more too by ending their obfuscation of what has really happened.

Casey B. Mulligan is a professor of economics at the University of Chicago. He served as chief economist for the White House Council of Economic Advisers from 2018 to 2019. He is the author of the book “You’re Hired! Untold Successes and Failures of a Populist President.” He wrote this for InsideSources.com.