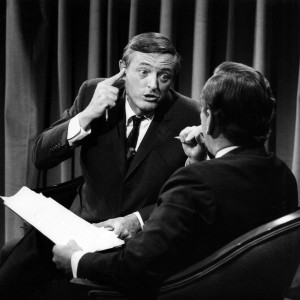 The American Film Institute’s annual AFI DOCS festival kicked off in Washington on Wednesday with a movie that helps explain the coarseness and polarization of today’s political discourse.

The film points to the on-air sparring as not just a first for television — it was unprecedented convention coverage from a network behind in the ratings — but also a formative moment for modern discussion of politics.

Neville and Gordon see today’s cable news confrontations as a direct result of those ABC broadcasts, during which Vidal called Buckley a “crypto-Nazi” and Buckley shot back, “Now listen, you queer. Stop calling me a crypto-Nazi, or I’ll sock you in your goddamn face, and you’ll stay plastered.”

“What they were doing is anticipating the culture wars that we live in now,” Gordon said in an interview before Wednesday’s screening at the Newseum.

The Buckley-Vidal debates also came at an usually tumultuous time for America, as ABC News veteran Sam Donaldson was quick to remind InsideSources at a reception following the film.

“It capped the year after the assassinations of Martin Luther King, Jr., and Bobby Kennedy,” Donaldson said. “It was like America coming apart.”

Neville and Gordon worry that America is still coming apart when it comes to political media.

Even as they argue that Buckley and Vidal contributed to incivility in politics, the filmmakers pine for a time when large numbers of Americans would watch the same in-depth discussion of political issues.

The directors appreciate all the benefits of today’s news, but they worry about media echo chambers in which readers, listeners and viewers avoid opinions that challenge their own.

“In a significant way, our film is about the double-edged sword of top-down news from the ’60s where several white males sat in the high floor of a building in New York and determined what the news was,” Gordon said during a Q&A Wednesday. “The good thing about that was everybody shared the same central facts. Now it’s a bottom-up news where anybody can report the news on the internet … and we’ve lost the shared community.”

Gordon told InsideSources that the two debaters featured in his film are also different from contemporary pundits in one important way.

“They’re not just speaking talking points,” he said. “They’re not ignoring what the other’s saying. They’re actually engaged in a high-minded dialogue that ends up on the low road. … These two guys had so much command of history, of language, of politics, so much authority.”

Today, Gordon said, “we’re engaged in a [media] culture that lacks that sense of authority.”

Best of Enemies is set to open in New York on July 31 and in Washington, D.C., on August 7.

Watch the trailer for Best of Enemies: