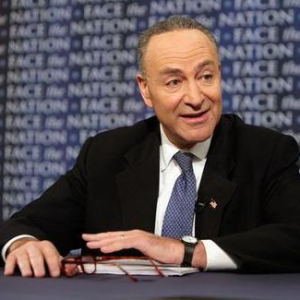 The Petition Calling Sen. Schumer #WarmongerChuck Already Has This Many Signatures

Created by the liberal group CREDO Action, the petition says Schumer’s stance is part of what makes him unfit to be the Democratic leader in the Senate — a position he’s set to inherit from retiring Sen. Harry Reid of Nevada: “Starting a war with Iran is apparently the top legislative priority for the next leader of the Senate Democratic caucus.”

“Chuck Schumer has spent his entire career carrying water for Wall Street interests,” Bond said. “Add to that his support for the Iraq and now a possible Iran war and it makes him a disastrous choice to lead the Democratic caucus.”

The CREDO petition appeared Saturday following the senator’s announcement on Medium late last week that he opposes Obama’s deal because “the very real risk that Iran will not moderate and will, instead, use the agreement to pursue its nefarious goals is too great.”

The declaration met with swift resistance from liberals, and CREDO isn’t the only progressive group going after Schumer and fellow Democratic defectors.

MoveOn.org posted a petition titled “No money for war hawks” that asks signers to “commit to withholding contributions from individual Democrats—and from any party committee supporting them—if they succeed in sabotaging President Obama’s diplomatic agreement with Iran.”

The accompanying statement from MoveOn.org executive director Ilya Sheyman was even more scathing than CREDO’s, condemning Schumer’s actions as “outrageous,” and “backward”:

No real Democratic leader does this. If this is what counts as “leadership” among Democrats in the Senate, Senate Democrats should be prepared to find a new leader or few followers.

As the New York Times reported last week, the decision to oppose Obama’s deal wasn’t an easy one for “the most influential Jewish voice in Congress”:

Like many Jewish Democrats, Mr. Schumer approached the agreement under pressure from his constituents, the administration, and his own personal history and faith.

USA Today reported Monday on the politics of his decision:

White House spokesman Josh Earnest said Friday Schumer’s influence among Senate Democrats was “hard to quantify,’’ but the administration was confident that other Democrats would make independent decisions.

Asked whether Schumer’s position should disqualify him to serve as Democratic leader of the Senate in the next Congress, Earnest said that decision is up to Schumer’s colleagues. “I certainly wouldn’t be surprised if there are individual members of the Senate Democratic caucus that will consider the voting record of those who say they would like to lead the caucus,’’ the White House spokesman said.

On Monday, Schumer dismissed the idea that his stance could jeopardize his shot at the leadership position.

Schumer was the first Senate Democrat to come out against Obama’s deal. His colleague Sen. Kirsten Gillibrand, a fellow New York Democrat, supports the agreement.