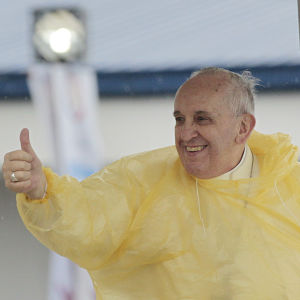 It’s hard to criticize the pope. It is like criticizing your mom. She means well, probably. But that doesn’t mean she’s not wrong sometimes.

This time, the pope is wrong — even if he means well.

He has been urging governments around the world to enact taxes and impose draconian new regulations on energy use (such as a pending law in California that will require a 50 percent reduction in petroleum use by 2030, to be achieved penalizing motorists who “use too much” gas or “drive too often”) in order to address what he styles “the urgency of climate change” and the need for “sustainable” development.

The problem is that while “climate change” — the new catch-all euphemism for catastrophic alterations in the world’s weather patterns — is conjecture, the taxes and regulatory restrictions advocated by this clergyman are very real indeed.

Specifically, the effect such will have on the world’s poor — for whom affordable electricity, warmth in winter and food are very real concerns.

Perhaps Francis takes for granted the lights that come on at the flick of a switch in the Vatican; that there is always food on the table. Hot water coming out of the tap. Millions of people around the planet, many of them in the “developing” world (Africa in particular) do not take such things for granted. The “sustainable” development urged by Pope Francis as he jets around the world means real sacrifices for real people — most of whom have never travelled by 747 or even Cessna.

And don’t wear Prada, either.

The pope is here in America now, to tout his political agenda.

This is an odd thing, when you stop to think about it a little. Pope Francis is a spiritual leader, a man who has spent his life studying the Bible, not chemistry or atmospheric science. For him to pontificate about “climate change” is as inappropriate — as silly — as a politician pontificating about eschatology.

This is not just a “pope problem,” either.

Many of the people urging radical steps to deal with purported climate change are, like the pope, not scientific experts in the relevant field. Many are layman. Often, laymen with political power — like President Obama.

It is telling that the language had to be altered to suit the inconvenient truths. It was not all that long ago these “experts” were sounding the alarm bells about an impending ice age and “global cooling.”

A heat wave during the ’90s made this idea seem preposterous.

But then the same problem arose — only in reverse. The weather began to moderate. Cold winters returned with a vengeance to much of North America, for instance. It became hard to sell global warming when much of the country was experiencing a deep freeze, as during the winters of 2013 and 2014.

Since the climate constantly changes, no more worries about explaining away hot summers — or cold winters. Anything could be attributed to “climate change.”

We are dealing with a political thing, not a scientific thing.

As Orwell observed, “political language is designed to make lies sound truthful … and to give an appearance of solidity to pure wind.”

Normal fluctuations of temperature — a heat wave, a tough winter — can now be characterized as ominously abnormal — something that requires a solution — on the foundation of the bizarre idea that the climate is not supposed to change.

That a static, unchanging climate is — somehow — normal.

This is as dangerous an idea as it is bizarre.

The climate is and always has been in flux. It will continue to change, regardless of the pope or the activity of the 7 billion people on this earth.

For instance: Atmospheric concentrations of carbon dioxide were much higher than they are today 250 million years ago — well before the age of industrial activity. How much higher? Five times higher than current levels, according to the National Academy of Sciences (not the Republican Party or the Koch brothers). This was the era of the dinosaurs. The Earth was much warmer and more humid than now and the high carbon-dioxide levels spurred the growth of vegetation, which fed the great plant-eating dinosaurs such as Diplodocus — who in turn fed giant meat-eaters like Tyrannosaurus.

Conversely, the era preceding the current warmer era was much cooler — the so-called Little Ice Age, which began in the mid-1300s and lasted until the mid-1800s. Winters grew longer and much harsher.

The climate changed — but due to natural processes, not human activity.

Recently, the weather has warmed again. Mostly, during the ’90s and early 2000s.

But the data indicate it is cooling once more.

For example, the much-touted shriveling of the polar ice caps. It’s true the Arctic (north pole) caps have retreated somewhat; but at the same time, the Antarctic ice (south pole) has increased. Cumulatively, polar ice has not declined at all, according to NASA.

There is also the inconvenient truth that tornadoes and hurricanes have lessened in frequency and severity. It is only because of 24-7 global media coverage that such natural phenomena seem to be happening more frequently — and with greater severity.

Another inconvenient truth: So-called warming data has been called into question by the discovery that many of the temperature readings used to back up the assertion of abnormally rapid, unnatural warming were taken in cherry-picked locations (such as concrete-paved cities) to goose the numbers in the desired direction.

The deeper you dig, the more you find. Keep in mind the stakes, too. It’s easy enough for affluent Westerners — this includes the pope — to glibly talk about “sustainable” development, because they will not pay the price. Millions of lesser humans will — and they deserve more from the spiritual leader of the world’s largest Christian denomination.

It is certainly possible that industrial activity plays some role in the weather. It is probably the case. But attributing all change — and imputing catastrophic and looming change that requires people stop driving cars and using electricity to light and heat their homes is political science — not science.

Pope Francis may mean well — and probably does. But he is not a scientist.

And should stop trying to be a politician.