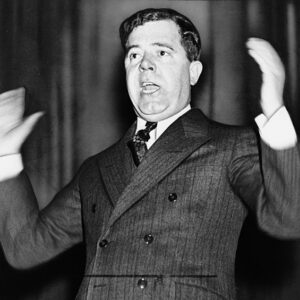 The Problem With Demagogues

In the midst of the extreme partisanship that dominates political discussion today, there is one thing about which we can probably all agree: These are volatile times. People are distrustful of one another. Basic institutions–political, social, religious–are unstable. And all of this is taking place in the midst of a pandemic, which magnifies every problem. But when countries face an uncertain future, dangerous forces can emerge.

For democracies, the greatest threat is always demagogues. This has been known since ancient times. In the “Republic,” Socrates warns democracies are the regimes most likely to end up as tyrannies. And this comes about at the hands of demagogues. The word “demagogue” is derived from two Greek words: demos, meaning “the people” and ago, meaning “to lead.” A demagogue is nothing more than a leader of the people. As Socrates says in “Book VIII,” “when a tyrant grows naturally, he sprouts from a root of leadership.”

Alexander Hamilton also warned of the danger of demagogues in the very first of the “Federalist Papers.” He said, “history will teach us that…of those men who have overturned the liberties of republics, the greatest number have begun their career by paying an obsequious court to the people; commencing demagogues, and ending tyrants.”

Demagogues are dangerous for the very reason that they draw their strength from the fears and passions of the very people they aspire to lead. Demagogues understand the psychic needs of the people and play on them for their own benefit, but the people only see that their fears and acknowledged and their passions fed. They unwisely support demagogues, not seeing that they don’t really care about them at all.

One of the greatest demagogues in American history was Joseph McCarthy, senator from Wisconsin, who advanced his career by claiming in 1950 (without any evidence) that communists were taking over the American government. One of his biographers, Richard H. Rovere, points out that he succeeded (at least for a time) by putting together a “coalition of the aggrieved–of men and women not deranged but deeply affronted by various tendencies over the preceding two or three decades.” He was seen as a “symbol of rebellion.” This seems to be a defining characteristic of demagogues. They inspire the aggrieved to rebel, but the rebellion serves the interests of the aspiring tyrants, not the people who empower them.

And what of their tactics? In his book “Demagogue,”  Larry Tye says this: “Attacked, they aim a wrecking ball at their assailants. When one charge against a manufactured enemy is exposed as hollow, they lob a fresh bombshell. If the news is bad, they blame the [media].” Lies. Deception. Scapegoating. It’s an old story, but it remains interesting because democracies always face new challenges and new demagogues always come on the scene.

Demagogues achieve their power by gaining the support of the people. They may resort to some questionable or illegal tactics along the way, but it is the support of their followers that makes it possible for them to take control of a government. It is only once they are in office that they become truly dangerous. Remember that Hitler was legally elected to office in Germany.

So how do we protect ourselves from demagogues? The most important thing we need to do, as Rabbi Sacks points out in “Lessons in Leadership,” is to challenge our leaders. Demagogues want followers who do not challenge them. This is why they work to dominate or control public information. True leaders welcome being challenged. They welcome disagreement and free debate. So if we find ourselves inspired by a leader, we shouldn’t accept what that leader says without challenging it. If a political leader wants us to give up our critical reasoning, that leader does not have our best interests in mind.

One of the dangerous tendencies of demagogues is to work to create a “cult of personality.” They seek blind loyalty from their followers and strike out against those who temper loyalty with independent thinking. We should watch for this. The assault on critical thinking goes hand in hand with unreasonable demands for loyalty. Demagogues will attempt to delegitimize all other sources of information, telling us to believe only what they say. That is poison for us and for democracy.

This is our challenge: at a time of political uncertainty, we have to resist the temptation to follow blindly any political leaders who claim to be our saviors, who tell us that they will take us back to a better time when we felt more comfortable, more respected, more powerful. Truly great political leaders want to serve the people; demagogues want the people to serve them.