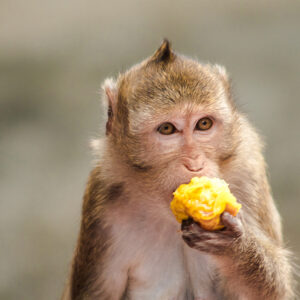 The Research Monkey Shortage is Real

In her December 1, 2020 op-ed “There Is No Monkey Shortage for COVID-19 Research – Because No Monkeys Are Needed,” biological anthropologist/ primatologist Lisa Jones Engel, Ph.D. argues that scientists solely conduct animal research to meet bureaucratic requirements from the Food and Drug Administration (FDA). She characterizes efforts of groups like mine to educate the public about the importance of animal research as deceitful.

I am the first to admit animal research is not necessarily a sexy topic. Some people find it easier to turn away from it than to try and understand the “how” and “why” of it.

While alternate methods like cell cultures, organs-on-a-chip, and computer simulations are effective in some areas of science, they cannot fully replicate the genetic pathways or the metabolism of a living organism. Research with rodents, which share more than 80 percent of the same DNA as humans; monkeys, which share between 93 and 98 percent of their DNA with humans; and other animal species help scientists gauge the safety and efficacy of treatments before launching human clinical trials.

Thanks to their genetic and physiological similarities with ours, monkeys are highly relevant animal models for basic research and translational studies. In December 2019, the FDA and international regulatory authorities approved the first Ebola vaccine, developed thanks to mice and nonhuman primates. Six months later, the second Ebola epidemic was declared over. After the 2009 H1N1 “swine” flu vaccine became available that September, the H1N1 flu pandemic ended in August 2010. The H1N1 vaccine was developed thanks to research on ferrets, mice, and monkeys. Before that, monkeys played a pivotal role in the development of polio and hepatitis vaccines.

The Pfizer/BioNTech and Moderna COVID-19 vaccines are based on a messenger RNA vaccine technology platform. This type of vaccine platform was developed thanks to animal research. In 1997, two University of Pennsylvania researchers observed that mRNA vaccines showed promise but provoked inflammatory responses in laboratory mice. They studied laboratory mice until 2005, at which time they discovered a method to chemically tweak the mRNA in the vaccines, making them safe for use.

Stating that there is no shortage of research monkeys because there is no real need for monkeys in research is misleading. It undermines the propensity of biomedical research to deliver on its promise to take us from hope to treatments and cures for millions of people.

Take a minute to visit www.fbresearch.org and ask a scientist you know to tell you about their work and how animal research ties into it.

Eva Maciejewski is communications director at the Foundation for Biomedical Research. She wrote this for InsideSources.com.