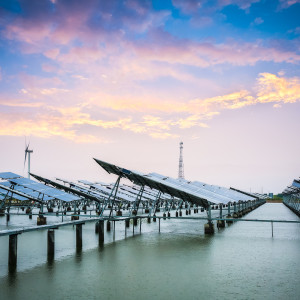 The Role of Public Lands in Renewable Energy Production

Public lands can, and should, play a prominent role in the development of our energy resources and our country’s energy future. Western states like Arizona contain millions of acres of public lands. Encouraging production on these lands will create jobs, generate economic growth and reduce our dependence on foreign sources of energy.

As an outspoken advocate of an all-of-the-above energy strategy, I believe public lands must be utilized for a wide variety of energy development projects, including renewable energy sources.

From the strong winds gusting across the plains of Wyoming and Eastern Colorado to the near-constant sunshine in Arizona and New Mexico, public lands in the West are perfect places to develop renewable energy sources like wind and solar.

A Wall Street Journal op-ed recently reported that “the California Environmental Quality Act has been abused by numerous labor unions such as the International Brotherhood of Electrical Workers, California Unions for Reliable Energy and the Laborers’ International Union of North America. Their tactics often involve suing or threatening to sue on purported environmental grounds solely to hold up permits until the use of union labor is guaranteed by renewables developers.”

I am also troubled that extremist environmental groups who claim to be strong supporters of renewable energy development continue to bringing frivolous lawsuits that prevent solar and wind production. Earlier this month, the Center for Biological Diversity, Defenders of Wildlife and WildEarth Guardians announced they would sue the Fish and Wildlife Service for not doing enough to protect the lesser prairie chicken and cited wind farms as being detrimental to this bird’s habitat and one of the reasons for the suit.

The Obama Administration continues to exacerbate these already-tough challenges by requiring expensive environmental reviews that are often duplicative and unnecessary.  This process can take several years before renewable projects are allowed to move forward on public lands.

In fact, the federal government’s regulatory structure on federal lands is so burdensome that most companies choose to develop on private land. Solar Energy Industries Association reports that of the 550 major solar projects throughout the country, only 16 projects have been permitted on federal lands under the Obama Administration.

To combat many of these issues, I introduced the Public Lands Renewable Energy Development Act. My bipartisan legislation streamlines the permitting process and establishes a competitive leasing program for wind and solar development on public lands. It also requires the implementation of a royalty revenue sharing process that is similar to the process for oil, gas and geothermal. Under this process, a portion of the revenues are returned to counties and states where development occurs, thereby encouraging production.

Since public lands are not taxable and production can have associated costs, state and local governments deserve to collect revenues from energy production on lands within their borders. These dollars help local governments deliver critical services such as road maintenance, public safety and law enforcement.

Furthermore, the federal government is required under the Federal Land Management and Policy Act to facilitate multiple-use and ensure our public lands continue to be utilized for diverse purposes, such as outdoor recreation, livestock grazing, mineral development and energy production, while still protecting natural treasures.

By developing renewable energy resources on public lands, we not only move toward energy independence but we also create jobs in some of the nation’s most rural areas.

Congressman Paul Gosar hails from Prescott, Arizona and is serving his second term in Congress as the Representative from Arizona’s Fourth Congressional District. A graduate of Creighton University and Creighton Boyne School of Dentistry, Congressman Gosar owned his own dental practice for 25 years. Congressman Gosar and his wife Maude have three children. The dentist-turned-Congressman is committed to being open, accessible and responsive to his constituents and to eliminating waste, fraud and abuse in the federal government.