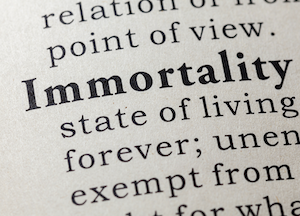 The Search for Immortality

The concept of living forever has been with us throughout history, Mayans and Egyptians are just a few. While our physical bodies may not last, maybe our essence, our mind, might in some other form than within our body.

There are four hurdles, which must be conquered before that can happen: understanding how the brain works; simulation of the brain’s functions; a compact container to hold it; and finally, be able to transfer the mind or brain information to the container. Each one a monumental task.

There is research in some of these areas. Rather than reaching for that final goal today, science is concentrating on fixing problems of our living body. Sooner or later, we will reach the practical limits of fixes, and in so doing our efforts will blend into how our mind — us — can live forever.

On the way to that goal, our brain may get help, according to Alice Parker, professor of electrical engineering at the University of Southern California. She is emulating pieces of the brain, such as synthetic vision and hearing systems. These will interface with a real brain and may be available soon. It may go further and become synthetic parts of the brain’s cortex within decades.

Professor Henry Markham, director of the Blue Brain Project in Switzerland, has already simulated parts of the neocortex, which evolved rapidly in mammals to cope with the demands of parenthood and social situations. The team created a 3D simulation of around 10,000 brain cells. These mimicked the behavior of a rat’s neocortex using an IBM Blue Gene supercomputer. With today’s technology, if the team could construct a synthetic human brain, even crudely, it would take 100 billion artificial neurons and a very large room to hold the computers. When might this happen? Maybe in this century, but certainly in the next.

The real problem is to develop artificial neurons to learn by experience and adapt to changes in their environment the way neurons do. Another characteristic of learning is to grow new neurons and synapses. Together these are called “brain plasticity.” Our brains can grow new neurons and the synapses between them in an hour, a remarkable biological feat difficult to emulate from an engineering perspective. Professor Parker stated this would require a major leap in technology, like the leap from cathode-ray tubes to transistors. Another mountain to climb will require the synthetic brain be able to self-assemble and reshape itself.

There is one other small problem: acquiring the mind’s information.

Dr. Ken Hayworth, a neuroscientist at the Janelia Research Campus in Virginia, maps slivers of a mouse’s brain. Hayworth believes mapping the complex connections of all neurons in a brain holds the key. This area encodes all the information that makes us who we are.

Assuming at some point, we can build a human-size electronic brain, where do we put it? Conventional thinking is in a humanoid or robot. Building an “upgraded us” will require it has extreme mental and physical abilities; creativeness and self-awareness; acute sensory perception in vision, smell, touch; and analysis far beyond anything we can imagine.

Impossible? Science fiction yesterday is reality today. Somewhere in the future the capability may be able to perform tasks with the mind itself. Heck, we may already be there; my wife just thinks of things for me to do, and I do it! Today, we still must physically perform functions using muscle power for at least the near future.

There are several companies and universities working this problem, one, at Columbia University’s Department of Mechanical Engineering. It has created a synthetic soft “muscle” that is capable of lifting more than 1,000 times its own weight. These and related areas could spawn a new generation of wearable electronics, and medical implants that would last a long time without being repaired or replaced.

There are many challenges that must be solved on our way to immortality. We are probably decades or even centuries away from that goal. However, one can never tell, doors open that we didn’t know were there, and new avenues appear. Will you and I be the recipients of immortality? No, we were born too early!