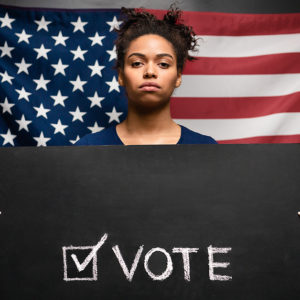 The Soft Bigotry of Liberal Election Litigators Will Backfire

Posted to Politics September 19, 2021 by May Davis

We—all of us, Black, White, poor, rich—live in the golden age of voting opportunities. Bearing nothing but proof that you exist (if that), millions of us can vote early, at home, overseas, late at night, on bilingual ballots, and without any pre-registration or forethought. None of these niceties are historically mandatory. I’m old enough to remember when I had to show up on election day to vote and I—a confused and incomeless first-time young biracial voter—survived it. Yet, Democrats, corporate America, and the media would have us believe that without free meals and outdoor drop boxes (Georgia), or drive-through and overnight voting (Texas), states are disfranchising minorities. The day it was signed into law, at least five lawsuits were filed against Texas’s voting law. The many lawsuits allege that, because “fraud is rare,” any attempt by the state to reduce or prevent it must be discriminatory.

The endgame is obvious: Firing up the base and increasing Democratic turnout. (Weird, I don’t see any lawsuits challenging Wyoming’s voter ID law. I wonder why?)

These lawsuits are not based on legitimate concerns that election integrity measures might limit voting access. They are about inflaming the racial divide, securing minority votes, and securing Democrat control, in what activist lawyers perceive as swing states. And so the litigators target winnable states with lower Black and minority turnout than White turnout—Georgia had 68 percent White vs. 64 percent Black turnout, and Texas had 65 percent White vs. 61 percent Black turnout in the November 2020 election.

Securing more minority votes should be about actually earning more votes—by, for example, identifying a problem plaguing our cities and actually solving it. But instead of increasing voter turnout, liberal litigators have chosen to sue to eliminate voting rules that they describe as burdensome. This strategy may well backfire.

For one, the litigators suffer from unmistakable bigotry in their ivory tower. It turns out, you see, that strict voting laws do not depress minority turnout. For proof, let’s take Mississippi. Mississippi had a higher percentage of Black voter turnout than White voter turnout in 2020. But Mississippi also has one of the most restrictive voting laws in the country: No early voting, no online registration, no same-day registration, and IDs are mandatory. If you’re surprised, consider why.

To say out loud that minority voters are unable to secure identification or need someone to collect their ballots or provide them food while they wait in line to vote has the abject tinge of racial stereotyping and low expectations. As I can attest, minorities are fully capable of slightly burdening themselves (leaving the house to vote on a Saturday rather than a Sunday) for something that they feel is worth it.

It’s no doubt true that minorities in America are disproportionately poor and have suffered historical discrimination. These are facts. But we’re not talking about great-great-great-grandfather clauses, poll taxes, or terrorist groups blockading the polls. We’re talking about Texas’s law that allows voting until 10 p.m., but not overnight.

This need to claim that minorities are disproportionately unable to vote on account of election integrity laws overshadows an underlying reality. Today’s octogenarian liberal ruling class does not have a slate of passion-inspiring policies to drive Democrat voters to the polls organically. A 2019 survey showed “beating Trump” as the top motivator for Black voters. That worked for 2020, but what now? Affordable housing, affordable college, and affordable healthcare all rank as top issues, but they tend not to draw the passion of Republican focal points like the Second Amendment, pro-life policies, or terrorism and safe communities. A Democrat candidate can promise more free government programs until the cows come home, but color me unsurprised if his rally turnout is low.

But the biggest problem with liberal litigators and the media crying racial disfranchisement is the sense of disempowerment they create. Republicans are no stranger to this, and very recently at that. During the Georgia 2021 runoffs, even though Republicans were entirely able to vote, they felt a lack of empowerment, due to powerful voices telling them the system is rigged. In feeling this lack of empowerment, hundreds of thousands of usual Republican voters didn’t vote. Liberal litigators may shrug now. They are not Stop the Steal rally-goers, they think. But their message is the same: the system is rigged against you. And when that message permeates the minority voting base, I wonder if they’ll find today’s CNN spotlight was worth it.

May Davis is a visiting fellow at Independent Women’s Forum and a former legal adviser to President Donald J. Trump. She wrote this for InsideSources.com.