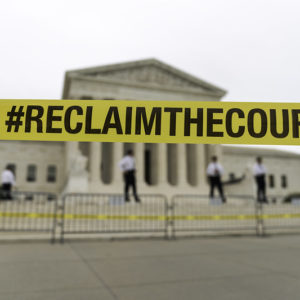 POINT: The Supreme Court Is Already “Packed;” Democrats Need To Unpack It

Yet that is what happened when then-Senate majority leader Mitch McConnell blocked consideration of  President Barack Obama’s, Merrick Garland, to replace Antonin Scalia in 2016. For ten months, until the next presidential election, McConnell refused to take the field. He reshaped the rules and the institution relating to the nomination of a Supreme Court judge.

McConnell’s justification was nominees should not be confirmed during an election year. Yet, four years later, McConnell rammed through the confirmation of Justice Amy Coney Barrett days before President Joe Biden’s election. Rules and tradition be damned. “Power takes precedent” seems to be McConnell’s guiding light.

McConnell and his Republican colleagues have already packed the court. It’s time for the Democrats to add four justices to counter the injustice exacted by the conservative right. It is not difficult to imagine that had Democrats maneuvered in a like manner, Republicans would be pushing for a modification of the Supreme Court. They would be right to do so because the process was dishonorable.

The urgency to act now is even more evident because McConnell says it is “highly unlikely” that he will let Biden fill a Supreme Court vacancy in 2024 if GOP wins back the Senate in 2022. He would again dishonor the court and the constitution to suit his bias.

McConnell, in effect, believes it is his right to bend the rules to expand the conservative advantage of the court regardless of what it does to the institution. Given McConnell’s statement, it is not a stretch to assume that there is a reasonable possibility the court’s make-up could soon be seven conservative and two liberal-leaning justices.

Should the court be expanded by the Democrats, McConnell will be at the forefront of those opposing an expansion while hypocritically ignoring his contribution to the court’s current veneer of illegitimacy.

Expanding the court is closer to unpacking it. To illustrate the one-sidedness of the make-up of the current Supreme Court, examine the age of the past three appointees, Neil Gorsuch, Brett Kavanaugh, and Amy Coney Barrett. With an average age of 52, their total time serving could easily exceed 100 years.

The longevity advantage conservatives hold is not the main issue, however. It is a procedure in which tradition and fairness were trashed, leaving a patina of underhandedness and bias that hangs over the court.

Expanding the Supreme Court now would help remove that stain. It could also work to improve trust in the court, currently missing, if done well. In a Gallup poll, only 40 percent of Americans approved of the court’s actions this past September. This is a new low that dates to the year 2000.

The analogy to a bending of the rules and tradition of baseball may seem far out to some. But it is very likely that we would not stand for such an action in baseball, a far less critical entity than the Supreme Court. That fact makes it crucial that we not stand for the egregious behavior of Sen. Mitch McConnell and the Republican party in “packing” the Supreme Court.

Unpacking the court and modifying the nomination and ratification process need to be taken to avoid such corruption in the future.