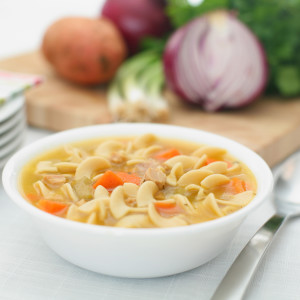 The Sustaining Knock on the Door

For some Americans today, tomorrow and the day after, on and on, a knock on the door is the high point of a lonely life. They are the old, infirm and shut-in; and they are a growing part of our aging society. Even though many of them have children and grandchildren, if you live alone and you are old, you know what it is to be all by yourself and lonely.

I think of them as the Alone Generation: people who suffer the privations of age and the dark place of loneliness.

The daily knock on the door comes from a volunteer for Meals on Wheels, and means a meal and little companionship. It is a public-private partnership that works: food for needy people.

That knock on the door comes a million times a day as Meals on Wheels volunteers fan out in their communities to deliver food. Some drive great distances in rural areas, some around their own neighborhoods.

According to Ellie Hollander, CEO of Meals on Wheels Association of America, based in Alexandria, Va., the typical recipient is 75 years old or older, is usually a woman, takes at least six medications a day, suffers some physical impairment, and wants to live independently.

About a third of the organization’s funding comes from the federal government, and the other two-thirds comes from state and local governments and charities. There is a lot of volunteer labor.

Hollander says the money spent on keeping people at home is a national bargain: It keeps them out of expensive nursing homes, hospitals and other pricey warehousing.

You do not have to plunge into the statistics about aging — but Pennsylvania alone has more than 2 million seniors, according to the Bipartisan Policy Center. Instead, just go to any rundown area of any town or city and you can see them asking grocery store employees about the price of everything, pulling wads of coupons out of their wallets before they hand over their money at the checkout, and struggling to carry their purchases.

My town in Rhode Island has an area called Arctic, which is home to a lot of old people. Their needs are palpable. I see them on the streets, in the drugstores and the grocery store. Some are bent over, nearly double. Others can walk only with canes and walkers. They stand in the cold without shelter, as they will this week, waiting for a bus that comes infrequently. Shopping is a burden without a car, and taxis are expensive. So my neighbors do things the hard way, the only way.

My neighbors are not derelicts. They have worked all their lives, many not in pensionable jobs. They live on Social Security and balance their spending between shelter, food, medicines, utilities and clothing. For them, and many millions of aged Americans, it is about staying alive.

There are studies and committees on the aging; the White House talks about it, Congress ruminates and appropriates a sliver of money. But the horrible truth is millions of old people, probably already undernourished and sick, choose daily between food and heat, food and medicine, food and rent or even clothes.

Retirement communities, assisted living centers, sunshine enclaves in Arizona, Florida and Nevada, are only part of the story of aging. Mostly age comes stealthily, creeping up on people in the communities where they have put down their roots.

I look at poor, old people everywhere and wonder what they were like when young; when they were full of love and joy and hope. I wonder how they make it now, staving off starving or freezing, or living with aching loneliness.

It is worth thinking about this when politicians attack “entitlements” and imply that those in need are there by choice.

The well-off avert their eyes and blame the old for not being better with money in their youth. Unfortunately, many never made enough money to save.

These winter days, as the snow piles up in much of America, fewer people will get that sustaining knock on the door.