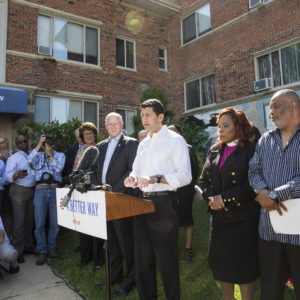 House Speaker Paul Ryan of Wis., center is joined by, from right, House Budget Committee Chairman Rep. Tom Price, R-Ga., Bernard Vaughan a local resident, Bishop Shirley Holloway, director of the House of Help City of Hope, House Agriculture Committee Chairman Rep. Mike Conaway, R-Texas, and Rep. Jackie Walorski, R-Ind., speaks in the Anacostia neighborhood of Washington, Tuesday, June 7, 2016, where he proposed an overhaul for the nation's poverty programs. The proposal would make changes to welfare, food and housing aid, among other programs, to increase work requirements, make the aid more efficient and allow states to make more decisions about how it is distributed. (AP Photo/J. Scott Applewhite)
[IS] Opinions

The Three I’s of Regulatory Reform

Posted to Politics June 20, 2016 by Patrick A. McLaughlin

House Speaker Paul Ryan recently unveiled an ambitious regulatory reform agenda. It’s chock full of ideas, but at its core, they stem from one simple question: What regulatory process would deliver the most effective regulations at a reasonable cost?

While most regulatory experts—and some politicians—can point to a regulation that seems ineffective, silly, or even harmful, this plan goes deeper by addressing the underlying problem: the process itself. By articulating a positive vision for the regulatory process, Speaker Ryan’s agenda clearly stands apart from mere election-year rhetoric.

The envisioned regulatory process is simple: First, prior to regulating, investigate whether a regulation would actually address an otherwise intractable problem. Second, consider various approaches to solving that problem, including market-based alternatives. A failure to consider a wide range of options is equivalent to buying the first house a realtor shows you. Third, go back and review regulations to see if they have worked as intended, and modify or eliminate those that are obsolete or ineffective.

As in any process involving people, the creation of laws and regulations is subject to human error. Technology companies, for example, perpetually correct bugs and flaws, as evidenced by the updates to your phone’s or computer’s operating system. But those companies don’t just correct errors discovered after products are released. They also re-examine the product creation process itself and seek ways to reduce the error rate.

Speaker Ryan’s agenda follows a similar logic. Regulations are legal products jointly created by Congress—because all regulatory authority stems from Congressional mandates—and regulatory agencies. If we want to reduce the error rate, we need a process that assures quality and usefulness, both during the creation phase and after their effects have been observed.

How do we get there? Regulatory process reform begins with the three I’s: Information, Incentives, and Implementation. To improve any process, you need to know how well the current one is working. Which products perform best? Which products were ineffective? What features of the current process are linked to the best performers and the worst performers? Speaker Ryan’s agenda highlights some ways in which information about regulations’ performance could be improved.

One suggestion would require agencies to publicly disclose any scientific and technical information used to support regulatory decisions. Another involves shifting some duties for estimating the costs of regulations away from the agencies issuing the rules themselves to an independent body.

Of course, the existence of better information doesn’t guarantee its usage. For that, you need incentives. To that end, Ryan’s agenda suggests exploring the notion of a budget for regulations.

Many versions of regulatory budgets have been suggested, with the earliest versions attributed to Robert Crandall of the Brookings Institution and former Senator Lloyd Bentsen (D-Texas) in the 1970s. Speaker Ryan’s agenda mentions several versions, but the most developed would work like a spending budget, where “Congress would allocate to each regulatory agency a limit on the amount of regulatory costs that could be imposed each fiscal year. Once the budget limit is reached, the agency could not issue any more regulations” unless granted additional authority by Congress—or, in some variations, if the agency earned credits for the cost of regulations that it repealed. This works just like a household budget—by setting limits, you create incentives to only spend when necessary and to prioritize those activities that would be highest value. It also incentivizes you to gain some extra spending power by eliminating unnecessary spending.

Then there’s the hard part: Implementation. Improving information quality won’t guarantee an improvement in product quality, at least not without addressing the incentives of regulators. At the same time, it would be difficult to address the incentives of regulators without improving the information available to them and Congress. The delivery of better regulatory results will require the implementation of reforms to every step of the regulatory process.

There’s no silver bullet—nor does the Speaker’s report suggest one. Instead, the agenda highlights many of the points in the process where reform can begin.

Patrick A. McLaughlin is a senior research fellow with the Mercatus Center at George Mason University.