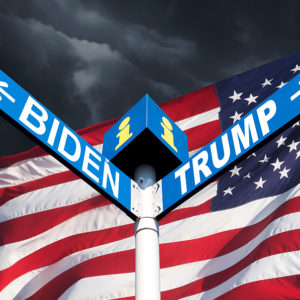 The True and Lasting Costs of the Biden-Trump War

I seldom write about politics. It gives me no pleasure, and I’m not certain I have a view that hasn’t already been shared by many. I scroll daily, hoping for some positive news.

For the record, I am one of those “independents” that both parties try hard to lure. I grew up a Democrat, but I don’t recognize the party today. I am the kind of voter prone to doing a “write-in.” In marketing terms, I am a dissatisfied customer.

I won’t bother detailing the horrendous behaviors of our fearful leaders because that would only incur a game of whataboutism — the “comeback” game where every bad action is motivated by a previous bad action. It’s a game of moral revenge that serves no one, and certainly not us, the citizens.

What I will share is the greater cost of our current payback mood. Both Joe Biden and Donald Trump will be in our rearview mirror someday. That day can’t come soon enough. The problem is that the collateral damage left behind will make a recovery hard.

Here are just a few areas that incurred significant damage in our political uncivil war:

The FBI was created in 1908 when then-Attorney General Charles Bonaparte created the bureau to investigate select cases of the Department of Justice. Its first major case was Charles Lindbergh’s baby kidnapping in 1932. J. Edgar Hoover served as director for 48 years, and his dubious (at best) record goes beyond the scope of this piece.

Today, as measured by a Gallup poll, the FBI’s approval rating has gone down, from 57 percent in 2019 to 44 percent in 2021. Note that this is before the Mar-a-Lago search, which has only fueled its detractors and deepened the partisan divide.

Those who have lost faith in the FBI cite a high degree of politicization, a group of partisan agents acting on the president’s behalf, and a willingness to cut corners that circumvent the law.

Others still believe in the FBI’s mission and find relief in its purpose. Hence the divide.

President Harry Truman founded the National Intelligence Authority in 1946 after the attack on Pearl Harbor. From the beginning, its role was coordinating government intelligence efforts at home and abroad, which rankled the FBI in a serious turf war that hasn’t served either agency well. Does an “American Gestapo” ring a bell (how the FBI referred to the CIA)? Some now say, “President Biden’s Gestapo.”

A Gallup poll shows a similar decline in favorability, from 60 percent in 2019 to 41 percent in 2021. There are many reasons for this decline — from acting outside the law to spying on Americans to losing some of the agency’s best people to a high degree of politicization within the agency.

Again, an American institution has lost the faith of many Americans. We have forgotten that the CIA gave then-President John Kennedy a heads-up when the Russians planted missiles in Cuba. It also flew the U-2 spy plane to accurately assess Russian military strength. Those glory days feel long gone.

The Department of Justice has been deeply affected by the current environment. While most Americans approve of the DOJ’s investigation of Trump (54 percent, according to a Rasmussen poll), 60 percent think it’s likely that the investigation is politically motivated. So, what are we? Relieved or disturbed or both?

As with the CIA, DOJ had stellar moments, from civil rights enforcement to fighting organized crime. Still, it’s not how most Americans perceive the DOJ today.

The Supreme Court has taken the biggest beating in public confidence of all the institutions mentioned. Gallup Reports that only 25 percent of Americans have confidence in the Supreme Court, down from 36 percent in 2021.

There have been other prior lows in confidence (30 percent in 2014), and the average since 2006 has only been 35 percent and never exceeded 40 percent in any survey. Hasn’t our belief in the courts been a strong distinguisher between us and other countries? What would our Founding Fathers have to say?

“Fake news” has become common vernacular. The majority of Americans do not believe the reported news, and this is perhaps the costliest of all the collateral damage and maybe the most difficult to fix.