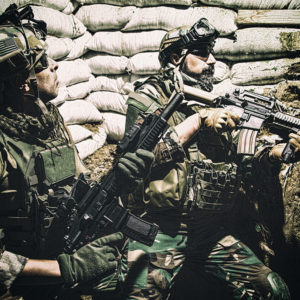 The Unexpected Navy SEAL: A Lesson in Identifying Talent

Before I became a Navy SEAL, I was a Recon Marine and scout sniper, having risen to the rank of sergeant. I was confident in my abilities as a warrior and leader, and I thought I knew what it took to succeed in the military and Special Operations.

Newly commissioned as a naval officer, I went to Naval Special Warfare Basic Underwater Demolition/SEAL (BUD/S). There, I met Ryan Job, a man who challenged everything I thought I knew. It was a brutal lesson in humility and how to identify talent that I’ve carried with me from my time in the military to my work in the business world today.

BUD/S is more than just training; it’s an intensive six-month assessment and selection process that sees 80 to 85 percent of students drop out. You could say it’s the longest and most thorough behavioral interview on the planet.

Prior to BUD/S, my time in Marine Recon taught me how to lead a team, and I foolishly and arrogantly believed I could spot who would make a great SEAL.

Ryan didn’t look like a SEAL. He was on the heavier side — for a SEAL, at least — and nobody knew how he’d made it through the initial physical standards to even get into BUD/S, including the instructors. But by the end of Hell Week, approximately two months into training, the class had gone from 250 students down to 35—and Ryan and I were both still there.

Later in our careers, Ryan and I both reported to SEAL Team 3, and we eventually deployed together to Ramadi, Iraq, where we fought in the Battle of Ramadi in 2006, one of the fiercest battles during the Global War on Terror.

Ryan performed as an automatic weapons (machinegun) gunner during his days in Ramadi. After months of fierce fighting, Ryan was critically wounded during a major operation in south-central Ramadi, a contested area held by Al-Qaeda forces. He was shot in the face by a sniper while laying down machine gun fire to cover a squad of SEALs closing on the enemy.

Doctors declared Ryan would never recover his sight, and he also lost his sense of smell and taste — but somehow this didn’t slow him down. In the years after Ramadi, Ryan underwent countless surgeries and rehabilitation all while continuing to display the same drive and resiliency he demonstrated during his days at BUD/S.

Despite all the setbacks, he finished his bachelor’s in business with a 4.0 GPA. He ascended the 14,411 feet of Mount Rainier, and he even shot and killed a trophy bull elk. All without his sight, smell or taste.

In 2009, only a few weeks after he found out he and his wife would be having a baby, Ryan aspirated and died during his 22nd surgery for his injuries. He became what his teammates refer to as the “last fatality of the Battle of Ramadi.”

He was the third SEAL from his task unit to die. Fellow soldier Marc Lee was the first, and the second was Michael Monsoor, who was awarded the Medal of Honor for jumping on a grenade to save two SEALS, one of whom was me.

It’s hard for me to believe now that I ever doubted Ryan. I was always waiting for a time to apologize, and I’m grateful that found the time while we were in Ramadi. After I apologized, Ryan said, “It’s okay. Everyone’s been misreading me all my life.”

In business, just as in war, the talent of your people is the deciding factor between victory and defeat. The power of talent when you find it is undeniable, but talent may not look like what you think it will.

Ryan didn’t look the part of a SEAL. In the business world, his resume would have been immediately discarded, and he never would have even made it to the interview, but talent will not and should not fit in a mold.

Mike Sarraille is the CEO of EF Overwatch, an executive search and talent advisory firm, and leadership consultant with Echelon Front. He is a retired US Navy SEAL officer with 20 years of experience in Special Operations, including the elite Joint Special Operations Command. His is author of the new bestselling book, The Talent War: How Special Operations and Great Organizations Win on Talent. He wrote this for InsideSources.com