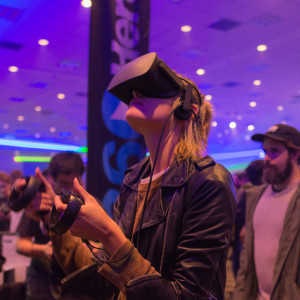 Barcelona’s annual Mobile World Congress stepped beyond the handheld device and screen into headsets and virtual reality in a big way this year that included new gear from the biggest names in the industry like Samsung, LG, HTC, Facebook and Valve.

Samsung kicked things off at the start of the week with a surprise visit from Facebook CEO Mark Zuckerberg, whose company acquired Oculus, one of the leaders in VR hardware and software development, for $2 billion almost two years ago.

“Pretty soon we’re going to live in a world where everyone has the power to share and experience whole scenes as if you’re just there, right there in person,” Zuckerberg said during Samsung’s press conference Sunday, where attendees were given a Samsung Gear VR headset to watch the conference through.

“Imagine being able to sit in front of a campfire and hang out with friends anytime you want,” he continued. “Or being able to watch a movie in a private theater with your friends anytime you want. Imagine holding a group meeting or event anywhere in the world that you want. All these things are going to be possible. And that’s why Facebook is investing so much early on in virtual reality. So we can hope to deliver these types of social experiences.”

The leading social media platform has since announced plans to make that a reality (of the virtual variety) by creating a team to develop VR social interactions, which will work with Oculus, whose efforts have primarily been focused on video and game development.

That partnership will extend to the Samsung Gear VR, which will start streaming 360 video from Facebook in “the next few weeks,” according to Facebook.

“360 video on Facebook is the first step — it allows you to look around and feel like you’re present while watching a video, whether it’s surfing in Tahiti or exploring the surface of Mars,” the company said in a post Sunday. “Our work in VR is still early, and there are a lot of hardware and software challenges that we still need to solve. But we’re encouraged by our progress to date, and we’re excited to continue building VR technology that gives people new ways to connect and share.”

There are already more than 200 games and apps available for Gear VR on the Oculus store, and users have already watched more than one million hours of video on the platform, Facebook said.

The Samsung Gear VR headset, which Samsung announced will come free with every Galaxy S7 pre-order, uses software developed by Oculus, while the Oculus Rift has used screens built by Samsung for its headsets, which have so far only been made available to developers but will start shipping to pre-order customers in late March (for $599.99).

Samsung wasn’t the only hardware manufacturer to show off its VR endeavors at the traditionally smartphone-focused MWC. HTC in partnership with Valve, the gaming giant behind Half-Life and Portal, announced a price point and pre-order date for the HTC Vive headset at $799.99 and Feb. 29, with deliveries beginning in April.

The Rift and Vive will come with controllers, sensors, headphones, free games and eventually offer bundles with compatible powerful PCs starting at $1,000. Both will also come with the ability to use the Unity engine developer toolkit, which has been used to make 90 percent of the Samsung Gear VR’s software library.

In addition to serving as a gaming and video platform, the Vive will let users answer calls, check texts and view the user’s phone calendar via integration with iOS and Android.

LG announced its own VR headset, the 360 VR, which will be powered by its new G5 smartphone, with price and release data announcements coming later this year. Chinese phone maker Alcatel will ship its new Idol 4S smartphone in packaging that can be used as VR headset to watch 360-degree videos and experiment with the Google Cardboard app.

Samsung and LG also announced camera systems capable of recording 360-degree video via devices equipped with two opposite-facing cameras with fisheye lenses, which can interface with their VR headsets.