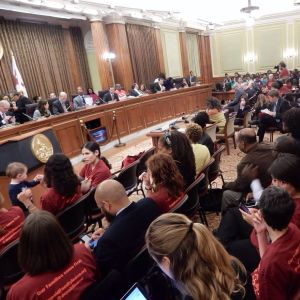 Legislation introduced at the D.C. Council last Tuesday would give the nation's capital the most generous paid leave policy in the country. (via Twitter)
News

The Washington Post editorial board, a reliable voice for establishment centrism, unloaded Wednesday on the increasingly-liberal D.C. Council, slamming recently-introduced legislation to guarantee 16 weeks of paid leave for workers in the District.

Under the headline “D.C.’s paid-leave proposal goes way too far,” the Post wrote that the bill, coauthored by progressive independent Council members Elissa Silverman and David Grosso, is “not grounded in reality and would end up hurting the District and its workers by driving up costs and driving away jobs.” By taxing employers to fund the most generous paid leave policy in the country, the paper argued the legislation would drive businesses to Maryland and Virginia.

“D.C. Council members seem to feel there is no limit to the demands they can make on companies that try to do business in the city,” the Post wrote. Noting that a majority of District lawmakers support the paid leave initiative, the paper knocked them for “apparent disregard for the realities of the business world.”

The harsh words from D.C.’s paper of record came as Mayor Muriel Bowser, a Democrat, was also expressing concern that the legislation could harm the local business climate. “We need to make sure that we’re not putting ourselves at a competitive disadvantage, with neighboring jurisdictions but also nationally,” Bowser spokesman Mike Czin said in an interview Tuesday.

Czin noted that the District recently raised its minimum wage in coordination with two adjacent Maryland counties, a move Governing Magazine called “an unusual hat trick in local government.” The decision kept D.C. competitive within the region, and Czin said it “could be a good model to follow” for paid leave.

For now, Bowser supports the current law granting eight weeks of paid leave to District government employees, and her office wants to study the impact of having those employees off work for more time. Asked if passing some kind of paid leave legislation was a priority for the mayor, Czin said, “It’s something we’re going to continue to take a close look at.”

Despite the mayor’s concerns — and outright opposition from the D.C. Chamber of Commerce — Grosso and Silverman believe their bill is actually good for business.

In a statement to InsideSources Thursday, Grosso argued it would “increase a person’s likelihood to return to work after a new child or a serious medical event, therefore decreasing the costs associated with employee turnover. And studies show that after paid family leave policies are put in place, employees are happier, more productive, and more loyal.”

“Many businesses have told me they support the bill, especially small businesses who would not be able to provide this benefit otherwise,” he said.

The legislation also received kind words Wednesday from the editorial board of the Current Newspapers, which cover D.C.’s largely affluent northwest neighborhoods. The Current called the bill “well worth examining” and argued that the lack of family friendly workplace policies in the United States is “something of an absurdity.” The paper then echoed the mayor’s office in advocating coordination with Maryland counties.

One person to watch as this legislation moves forward is Council Chairman Phil Mendelson. The Democrat wasn’t among the seven lawmakers who introduced the bill, but he previously supported minimum wage hikes and paid sick days. His office said he was unavailable to comment for this story.