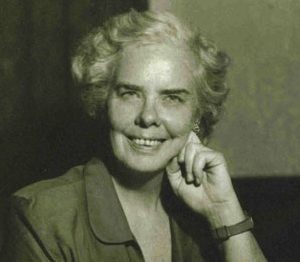 The Woman Who Healed JFK and Shattered a Glass Ceiling

On Memorial Day weekend, 1955, a car pulled up outside a doctor’s office at 9 West 16th Street in New York City and deposited a lean, gaunt young man on the sidewalk.

The woman watching from inside later remembered, “He was on crutches. There were two steps from the street into my office and he could hardly navigate them … He could walk on the level putting his weight on his right leg, but he couldn’t step up or down a step with his left foot. We could hardly get him into the office.”

The woman was Dr. Janet Travell, a noted expert on pain caused by muscle irritation. The man she was about to see was 38-year-old Senator John F. Kennedy.

Travell had followed a fascinating career path to arrive at this moment. Earning her medical degree from Cornell in 1928, she did her two-year residency while also serving as an ambulance surgeon for New York’s police department. Working in a Big Apple hospital just before World War II, she grew intrigued by skeletal muscle pain and pioneered new ways to treat it. Many of her techniques are still used today, 80 years later.

The junior senator from Massachusetts suffered from a myriad of medical problems. He had a sickly childhood, was hospitalized multiple times, and was even incorrectly diagnosed with leukemia (it was actually an adrenal ailment). A football injury to one knee, followed by a serious back injury sustained in the Second World War, kept Kennedy in chronic pain. There was surgery after surgery. In fact, he wrote his notes for the Pulitzer Prize-winning book “Profiles in Courage” in bed following a 1954 operation.

Travell quickly sized up her new patient. She discovered one of Kennedy’s legs was shorter than the other. So, she had lifts made for all his left shoes, which reduced stress on the back. She injected low doses of procaine into the lumbar muscles, which drastically reduced the pain. One recommendation even became an iconic part of JFK’s public imagine: She suggested he sit in a rocking chair to keep pressure off his back.

The change was swift. Soon, Kennedy’s crutches were put in a closet. In their place, Americans saw a robust, energetic candidate campaigning in the 1960 presidential race. Kennedy won it in a cliffhanger (it was the closest election in American history). Bobby Kennedy, the new president’s brother, even said Dr. Travell’s treatment had made the victory possible.

And so on January 26, 1961 — 60 years ago this week — Kennedy showed his appreciation by appointing her the first woman to ever serve as Physician to the President, an official White House position.

Today, with the first female vice president recently sworn into office, a woman serving as the president’s personal doctor may not sound like much. But it was groundbreaking in 1961. Travell’s appointment was met with much grumbling among the ranks of older male doctors. However, her sterling performance quickly quieted them.

Ironically, Dr. Travell also treated Senator Barry Goldwater, a founder of today’s conservative movement. That made the Arizona Republican quip, “I may have to work out a back-door arrangement with the new president,” so he could continue seeing her.

Travell loved her White House job and stayed on following Kennedy’s assassination. After stepping down in 1965, she taught at George Washington University. She kept on teaching and writing and sharing her remarkable knowledge until her death in 1997 at age 95.

Time magazine expressed what made Janet Travell special in its article on her precedent-shattering appointment: “A key ingredient in any Travell prescription is her personality. Forceful but warm, enthusiastic but eminently sane, she gives her patients some of her own confidence and that intangible touch of magic that is often better than any drug or needle.”

InsideSources presents another J. Mark Powell’s Holy Cow! History column every week. If you have strange-but-true history story to share or a historical mystery to unravel, please email [email protected]